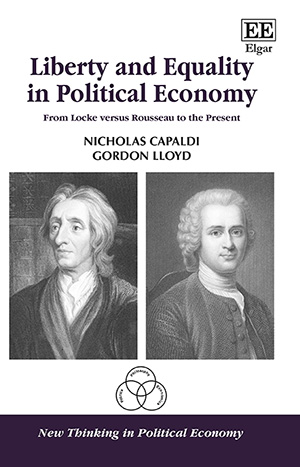 Liberty and Equality in Political Economy is an evolutionary account of the ongoing debate between two narratives: Locke and liberty versus Rousseau and equality. Within this book, Nicholas Capaldi and Gordon Lloyd view these authors and their texts as parts of a conversation, therefore highlighting a new perspective on the texts themselves.

‘In an age of specialization, Nicholas Capaldi and Gordon Lloyd have recreated that ancient tool of learning: the conversation. Beginning with the debate between John Locke and Jean-Jacques Rousseau, and continuing through to John Kenneth Galbraith, Milton Friedman, Friedrich Hayek and Thomas Piketty, this book invites the reader to join a conversation which has now lasted over three centuries. Don’t read this book if you just want a simple answer to complex problems. Do read this book if you want to think deeply and widely about the fundamental questions of how to organize a society.’
– Jim Hartley, Mount Holyoke College, US

‘Read this articulate adventure in Liberty, from John Locke through Adam Smith to Thomas Piketty.’
– Vernon Smith, Chapman University, US and 2002 Nobel Laureate in Economics