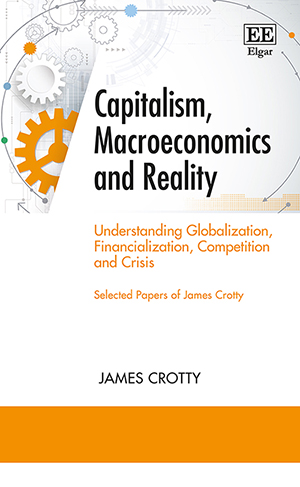 The essays comprising this collection analyze the deep flaws in the methodological foundation of mainstream economic theory, and explain how these flaws make mainstream economics more ideology than sound social science. James Crotty develops alternative theories built on realistic assumptions that can explain most of the disastrous economic and financial developments of the past four decades. His work contributes to the collective creation of a solid theoretical foundation on which to build an understanding of the ‘laws of motion’ of capitalism in the post WWII era.

‘Crotty’s book provides solid theoretical foundations to understanding key economic topics such as growth, distribution, and instability from a heterodox perspective. The reader will have a new opportunity to rethink macroeconomic policies not only based
on short-term operational targets but mainly as long-term systemic needs. For these reasons, this book is a valuable academic source for understanding the functioning of complex, path-dependent, crisis-prone capitalist economies.’
– Juan Matías De Lucchi, Review of Keynesian Economics