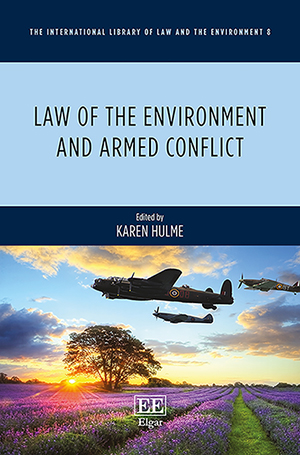 Law of the Environment and Armed Conflict

The International Library of Law and the Environment series

Forming part of a major series by Edward Elgar Publishing, Law of the Environment and Armed Conflict selects the most important and influential research articles relating to the protection of the environment in armed conflict. The book plots the trajectory of research on this issue from early weapons impacts and the Vietnam War, to the first major challenge for wartime environmental protections in the Gulf Conflict, liability for harm and possible future directions.

With an original introduction by the editor, this single volume will be an essential resource for researchers and policy makers alike.

‘This book is the perfect introduction and research tool for all of us that wish to understand the most pertinent issues relating to law of the environment and armed conflict. The compilation is skilfully composed by one of the absolute authorities in the field, Professor Karen Hulme. Through the selection of articles she takes the reader on a historic journey, unveiling the contemporary legal and political context, including the connection between international disarmament law and the law of armed conflict. The contributions discussing the example of the Iraq-Kuwait War – brings the reader into the modern discourse and it is skilfully complemented by contributions on the role of customary international law, gaps and possibilities in current law as well as responsibility for wartime environmental damage. In the last section of the book, Professor Hulme ties it all together by, once again, including contributions that are placed in a modern legal and political context – as well as a look into the future. This is indeed a book to welcome.’
– Ambassador Marie Jacobsson, Former Member of the United Nations International Law Commission and Former Special Rapporteur for the topic Protection of the Environment in Relation to Armed Conflict