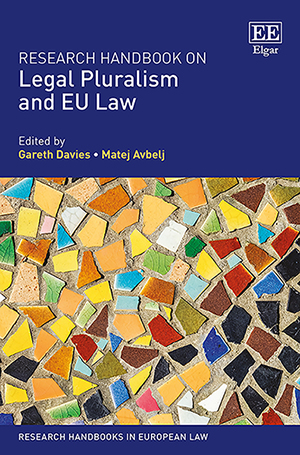 The Research Handbook on Legal Pluralism and EU Law explores the diversity of phenomenon of overlapping legal systems within the European Union, the nature of their interactions, and how they deal with the difficult question of the legal hierarchy between them. The contributors reflect on the history, sociology and legal scholarship on constitutional and legal pluralism, and develop this further in the light of the challenges currently facing the EU.

‘This Handbook is a valuable contribution that codifies the efforts of many of the contributors of the movement, providing a certain coherence to the polyphony that characterized (and still characterizes) its members. Through twenty-three contributions ranging from “classics” of the movement to some of its most recent and promising voices, the book provides a holistic vision of the movement, including its critics as well.’
– Daniel Sarmiento, Common Market Law Review

‘Legal pluralism has become a central concept by which to unpack EU and transnational law. It remains, however, an under-applied and under-theorised framework. This Research Handbook decisively fills this gap, developing pluralism’s theoretical foundations in novel directions through an outstanding group of contributors and using the concept to re-visit active debates in EU law and politics. I would recommend it to anyone as the definitive guide to legal pluralism in the EU for decades to come.’
– Mark Dawson, Hertie School of Governance, Germany