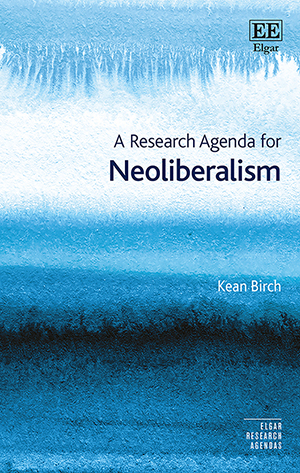 A Research Agenda for Neoliberalism

With an ever-expanding variety of perspectives on the concept of neoliberalism, it is increasingly difficult to identify any commonalities. This book explores how different people understand neoliberalism, and the contradictions in thinking of neoliberalism as a market-based ethic, project, or order. Detailing the intellectual history of ‘neoliberal’ thought, the variety of critical approaches and the many analytical ambiguities, Kean Birch presents a new way to conceptualize contemporary political economy and offers potential avenues for future research through a judicious exploration of ‘neoliberal’ practices, processes, and institutions.

‘Birch’s book is full of valuable detail and insight. . .  it does an important job of establishing the contours of the discussion of neoliberalism in such a way that anyone reading it will be unlikely to lapse into the lazy straw man forms of commentary which remain all too evident both within and beyond the academy.’
– LSE Review of Books

‘Engagingly written, this book offers a refreshing introduction to the intellectual history of neoliberalism. Offering an explanation of where neoliberal ideas came from, the varying ways in which these ideas have been analysed and used, and the core contradictions in the neoliberal interpretation of contemporary capitalism, it will be of great value to scholars and students alike. At a time when market ascendance is increasingly challenged, it also convincingly shows why neoliberalism cannot serve as a road map for the future.’
– Wendy Larner, Victoria University of Wellington, New Zealand

‘Kean Birch is, in my estimation, one of the most sophisticated thinkers on the subject of neoliberalism, and in this new book we see him push his thought in a bold new direction that challenges some of the foundational discourses that have attached themselves to the concept. This is a timely and vitally important intervention.’
– Simon Springer, University of Victoria, Canada