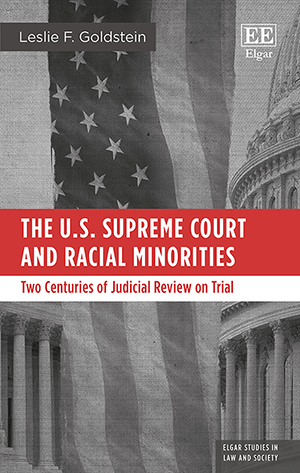 Elgar Studies in Law and Society

The U.S. Supreme Court and Racial Minorities offers an in-depth, chronologically arranged look at the record of the U.S. Supreme Court on racial minorities over the course of its first two centuries. It does not pose the anachronistic standard, “Did the Supreme Court get it right?” but rather, “How did the Supreme Court compare to other branches of the federal government at the time?” Have these Justices, prevented against removal from office by discontented voters (in contrast to the President and the members of Congress), done any better than the elected branches of government at protecting racial minorities in America?

‘Goldstein focuses on the treatment of racial minorities, including African Americans, Asian Americans, Hispanics, and Native Americans. The scope of her analysis is sweeping. In seven chronologically arranged chapters, she assesses 2 centuries of judicial rulings and federal policies from the founding to the late twentieth century. Goldstein references over 350 Supreme Court decisions in total, covering material that will be new even to Court specialists. At the same time, Goldstein also writes in clear prose without assuming technical knowledge of legal doctrine, making her book accessible to educated readers interested in the development of American law and politics. Her encyclopedic survey is an essential resource for understanding the Supreme Court’s ability to safeguard civil rights over time.’
– Keith J. Bybee, American Political Thought

‘The U.S. Supreme Court and Racial Minorities is a major scholarly enterprise. It offers an unusually comprehensive look at changes over time in the Supreme Court’s understanding of civil rights and race.’
– Emily Zackin, Review of Politics

‘Juxtaposing a comprehensive survey of the Supreme Court’s cases dealing with racial minorities – African Americans, Indians, Asian Americans, and Hispanic Americans – to an overview of how Congress and the President dealt with those minorities, Leslie Goldstein asks the right question: Compared to the other branches, how protective has the Court been? This is an important work for scholars and others interested in the Supreme Court and the history of race in the United States.’
– Mark Tushnet, Harvard Law School, US

‘This is a remarkable book, and essential reading for anyone who cares about how civil rights are defined and protected in America. It carefully situates the Supreme Court in its political and historical environment, and in doing so serves as an important reminder of the significance of politics in keeping our constitutional system functioning.’
– Keith E. Whittington, Princeton University, US