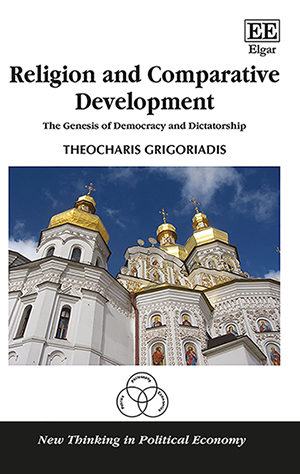 The Genesis of Democracy and Dictatorship

Religion and Comparative Development is the first analytical endeavor on religion and government that incorporates microeconomic modeling of democracy and dictatorship as well as empirical linkages between religious norms and the bureaucratic provision of public goods within the framework of survey data analysis and public goods experiments. Moreover, it explores the rising significance of religion in Middle East and post-Soviet politics, as well as in current migration, security and party developments in the United States and Europe alike through these lenses.

‘The political economy of religion is a sorely neglected topic, especially in connection to understanding comparative economic development. Grigoriadis employs a rich and interdisciplinary variety of empirical and analytical tools to document the myriad ways that religious beliefs and institutions can influence government administrative structures, public good and modernization policies, and subsequent development paths. The focus on Eastern Orthodoxy, in particular, is a welcome addition to scholarship on long-run economic development in Eastern and Southeastern Europe.’
– Steven Nafziger, Williams College, US

‘How have the values and institutions of the great world religions influenced public policy and its economic outcomes in different countries? In this book Theocharis Grigoriadis offers original concepts and new data for economists and economic historians. Focusing on Europe and the Middle East, the book locates religious cultures on the spectrum from collectivism to individualism, isolates their influences on the type of government, on the degree to which governments are committed to provide for society, and on central versus local provision. The findings break new ground in our ongoing search for the cultural and institutional roots of economic development around the world.’
– Mark Harrison, University of Warwick, UK

‘Values and norms shape individual behaviour and collective results. And religion or its renunciation is arguably the single most important vehicle of values and norms. Therefore, the influence of religion on political development and economic performance is an important - and complex - topic in social science at least since Max Weber. Theocharis Grigoriadis’ point of departure is that the big world religions differ in their valuation of collectivist vs. individualist features of institutions and that these differences matter for the incentives and possibilities of political leaders for modernization. The book brings together concepts and methods from history, political science, and economics and is therefore truly interdisciplinary. Drawing on a remarkable wealth of historical and institutional knowledge, game theoretic models, results from surveys conducted in Russia and Israel, and social lab-experiments in two Siberian cities, respectively, Grigoriadis pin down the role of religion for individual attitudes and decisions. In his foreword, he goes as far as claiming “that all world religions can offer pathways to peace and development through different institutional channels”. Although my reading of this highly recommendable book did not fully corroborate this optimistic view, the findings certainly shed new and valuable light on the role of religion.’
– Jürgen Jerger, University of Regensburg and Leibniz Institute for East and Southeast European Studies