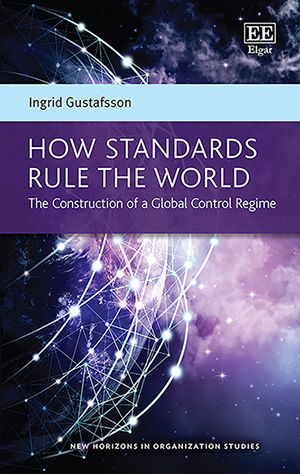 How Standards Rule the World

The Construction of a Global Control Regime

This book explains how international standards have come to specify almost all aspects of society, While resting on buzzwords such as ‘trust’ and ‘confidence’, the global control regime leaves us with a faceless bureaucratic system with no name and no one in charge. Using empirical and in depth analysis , the author discusses the consequences for responsibility: if no one is in charge, then no one is to be held accountable for how standards rule the world.

‘Gustafsson takes the reader through a fascinating historical account of the construction of a global control regime, and the parallel dismantling of a previous national order for market control. With a specific focus on accreditation a missing piece is added to the puzzle of global governance. Situated at the intersection of governance studies and organization theory, Gustafsson’s work contributes to a significant advancement of our understanding of key issues of global governance, such as authority, responsibility and the role of the state.’
– Kristina Tamm Hallström, Stockholm School of Economics, Sweden

‘Gustafsson pulls back the curtain on the contemporary global control regime, revealing a strange system of layer upon layer of standards, certification, and accreditation. The book drives home the point that in an ever-growing web of watchers watching watchers, authority looks to be everywhere but ultimately resides nowhere. A must-read for anyone interested in global governance and organization.’
– Patricia Bromley, Stanford University, US

‘In this thought-provoking book, Ingrid Gustafsson explores the role of standardization, certification and accreditation in establishing a global control regime. She provides a very insightful description of the way the different components of the regime interact to create a powerful but subtle form of control, blurring the line between controlling and being controlled. This book is of great interest to social scientists across the disciplines, from organization studies to political science.’
– David Seidl, University of Zurich, Switzerland