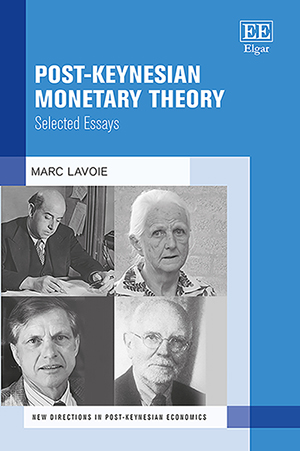 Post-Keynesian Monetary Theory recaps the views of Marc Lavoie on monetary theory, seen from a post-Keynesian perspective over a 35-year period. The book contains a collection of twenty previously published papers, as well as an introduction which explains how these papers came about and how they were received. All of the selected articles avoid mathematical formalism.

‘This collection of early essays on endogenous money by Marc Lavoie (and some later ones) is of the utmost importance. Marc’s commentary on the essay about Jacques Le Bourva is pivotal – ‘… a theory … [of] … the endogeneity of money is insufficient … one also has to reject the existence of a natural rate of interest …’’
– John Smithin, York University, Toronto and Aurora Philosophy Institute, Canada