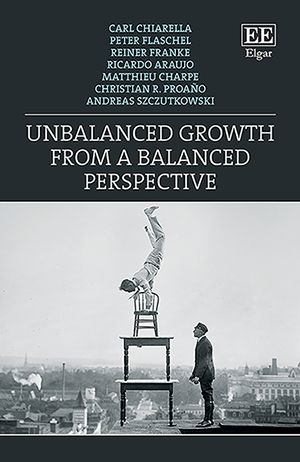 Unbalanced Growth from a Balanced Perspective

As a whole this book adds the ‘Keynes’-component (K) to the Goodwinian vision of a ‘MKS-System’. It first provides a reconsideration of prominent past approaches towards the formation of Keynesian macrodynamics. Ultimately it aims to integrate Marx's Distributive Cycle and aspects of Schumpeter's reformulation of socialism and democracy theory, with Keynes' macro-theory of a ‘Tripartite Market Hierarchy’. This regards financial markets as being at the top, followed by goods markets which in turn are followed by the weakest element, the labor markets. It is completed by certain repercussions that influence the central causal nexus of these three fundamental macro-markets in the longer-run.

‘This impressive research on unleashed capitalism is a heritage of the fruitful long collaboration between Flaschel and the late Chiarella. Through rigorous macrodynamic modelling they explore unbalanced growth as ruthless conflict between capital and labor, and conclude that only some sort of social capitalism can rescue the world from disastrous capitalism or socially vested administrative despotism.’
– Xue-Zhong (Tony) He, University of Technology Sydney, Australia

‘This work represents a culmination of the development of the Bielefeld School of macroeconomic thought, with its lead authors being core members of this approach: Peter Flaschel, Reiner Franke, and the late Carl Chiarella. However, it moves beyond their previous work with the addition of younger authors, and it also brings in chapters written by or about others that link this important approach to other approaches, such as stock-flow consistent models, modern Marxist models, and distinctive neoclassical models. This allows for the role of this innovative and distinctive school of thought to be seen in both its most up-to-date form as well as in its relation to other innovative approaches to macroeconomic thought.’
– J. Barkley Rosser Jr., James Madison University, US

‘A tour d’horizon of recent research on complex macroeconomic dynamic systems in the Keynesian tradition. Its 16 chapters (with two invited ones) cover a variety of recent developments, from the seminal Keynes–Metzler–Goodwin synthesis of various traditional sources of endogenous fluctuations to profit-rate cycles of the classical and Marxian type, to the inclusion of Schumpeterian innovation, Minskyan financial fragility and explicit animal spirit dynamics in the form of sentiment processes based upon social influences.’
– Thomas Lux, University of Kiel, Germany