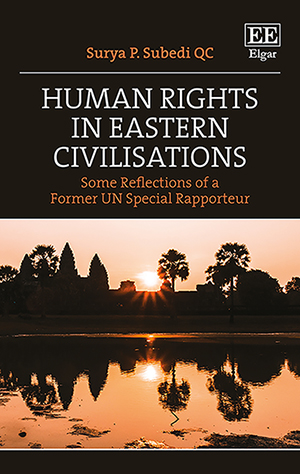 Some Reflections of a Former UN Special Rapporteur

Based on the author's first-hand experience as a UN Special Rapporteur, this thought-provoking and original book examines the values of Eastern civilisations and their contribution to the development of the UN Human Rights agenda. Rejecting the argument based on “Asian Values” that is often used to undermine the universality of human rights, the book argues that secularism, personal liberty and universalism are at the heart of both Hindu and Buddhist traditions.

‘A timely and important contribution that explores the implications of the shift in economic and political power to Asia for the global human rights agenda pursued since 1948. Former UN Special Rapporteur for Human Rights in Cambodia Surya Subedi writes from his unique perspective, including his knowledge of Hindu and Buddhist teachings, to argue that those significant religions share deeply-ingrained common values with those expressed in the UniversaI Declaration of Human Rights, and that the shift in global power will not lead to a turning away from the human rights agenda.’
– Charlotte Ku, Texas A&M University School of Law

‘Surya P. Subedi, now Professor of International Law at the University of Leeds, was born in a simple Nepali village and received a Sanskrit education until the age of 13. This book records his passionate and very personal attempt to bridge two worlds, to bring the world of his Brahmin ancestors, the Hindu civilization that they embodied, into harmony with the modern world of human rights and to show that there need be no contradiction, and indeed that human rights can receive succour from the well-springs of Hinduism and Buddhism.’
– David N. Gellner, University of Oxford, UK