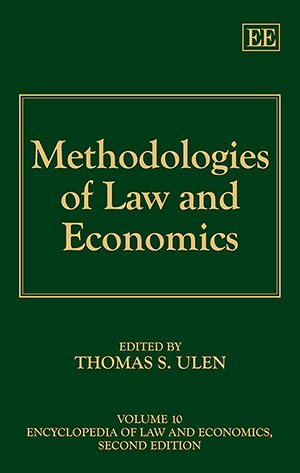 Methodologies of Law and Economics

When law and economics first became an important part of the legal academy, it was a relatively straightforward application of microeconomic theory to legal issues. However, in the past 35 years the field has expanded its toolkit dramatically. This latest volume in the acclaimed Encyclopedia of Law and Economics maps the methodological territory in Law and Economics, with a series of entries by distinguished scholars that introduce and evaluate that expansive toolkit, including the roles of microeconomic theory, public and social choice, history, complexity theory, philosophy, comparative law studies, behavioral economics, and empirical techniques. Each piece introduces the technique, demonstrates its importance to the field of law and economics, and assists the reader in navigating the leading literature on that topic.

‘Thomas S. Ulen has brought together a compendium of outstanding essays in Methodologies of Law and Economics that will appeal to both students of and established scholars in law and economics as well as those who are interested in exploring the development of an intriguing academic discipline that has grown and evolved over the last 40 years. While outsiders to the field might perceive law and economics to be a monolithic discipline, Ulen has succeeded in illustrating its broad array of approaches – theoretical, empirical, historical – all of which can be influenced by insights beyond economics from psychology, sociology, philosophy, political science and more. I was delighted to read and learn from this illuminating collection of essays that could only be synthesized by someone with Ulen’s vast depth of knowledge of the field and capacious intellectual scope.’
– John Donohue, Stanford Law School, US

‘This book provides an updated perspective on “law and economics,” emphasizing that the term now refers to a set of methodologies going beyond the conventionally economic, embracing the study of norms, behavioral and psychological factors, evolutionary mechanisms, and more. It begins with a useful overview authored by its editor, Professor Thomas Ulen, and I recommend it to those interested in the functional analysis of law.’
– Steven Shavell, Harvard University, US