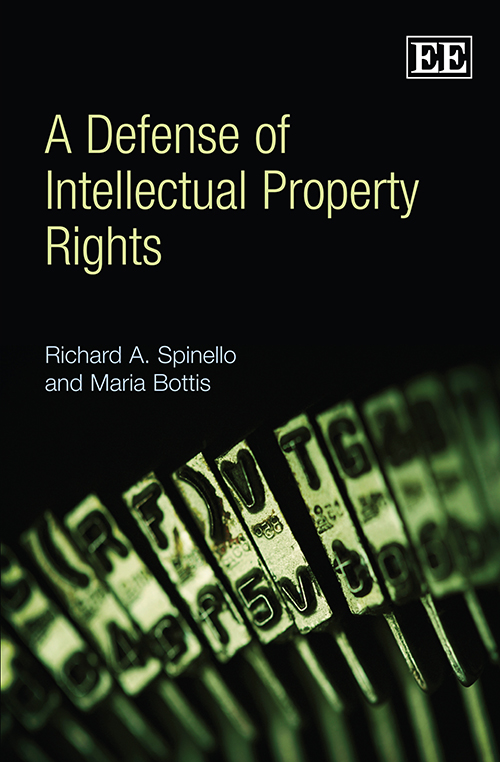 A Defense of Intellectual Property Rights

‘The book is well provided with detailed references/bibliography for those who want to pursue the matter. . . The authors have effected a very thorough analysis of the moral issues and the book is strongly recommended for that reason. . .’
– Brian Spear, World Patent Information

‘This book should change the contours of the intellectual property debate. Spinello and Bottis fully appreciate what the standard instrumentalist accounts of intellectual property cannot even acknowledge – that the lives and liberty of creators and artists are not the common property of society, and that it is intrinsically wrong to treat the efforts and projects of individuals as if they were unowned resources reaped as the fruit of the earth. Their work should help to reorient discussion of IP from an excessive concern with the economic and social consequences of competing policies back to the bedrock issues of basic respect for the integrity of our various particular lives and the labor that constitutes those lives. At the same time, they studiously avoid the unserious extremism that characterizes so much of the debate on every side, recognizing that respecting the lives and liberty of all sets real boundaries on the proper scope and stringency of IP claims, ruling out overzealous enforcement and radical repudiation alike.’
– Richard Volkman, Southern Connecticut State University and Research Center on Computing and Society, US

‘Since the rise of the Internet the question of intellectual property has been and still is one of the most controversial societal and ethical issues. The new global, interactive and bottom-up medium challenges moral, legal and economic structures not only in the music and film industry but also in the field of knowledge production, storage, distribution and access. The academic debate soon became and is still polarized between critics and defenders of IPR. The book by Richard A. Spinello and Maria Bottis A Defense of Intellectual Property Rights analyses in a critical and comprehensive manner some of the dogmas widely spread by the critics of IPR paying special attention to the differences between EU and European legal regimes. The authors explore the foundations of IP in Lockean philosophy, as a representative of a natural law approach, as well as in the theories of Fichte and Hegel based on deontological arguments. Both perspectives prevail in European law while American property law is widely based on utilitarian arguments. The authors argue in favor of Lockean and Hegelian foundations showing their relevance in the present debate as well as calling the attention to the link between these theories and the Catholic social doctrine. The book is an important contribution to this ongoing debate.’
– Rafael Capurro, Stuttgart Media University, Germany