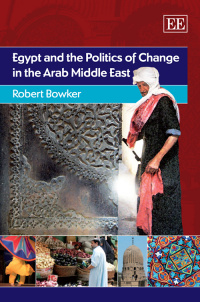 9781848448650 Edward Elgar Publishing
Robert Bowker, Adjunct Professor, Centre for Arab and Islamic Studies (the Middle East and Central Asia), The Australian National University, Canberra and former Ambassador to Egypt
Publication Date: 2010 ISBN: 978 1 84844 865 0 Extent: 240 pp
Egypt and the Politics of Change in the Arab Middle East is a forward-looking analysis of the relationship between economic and political reform in Egypt, and of the evolving nature of Arab society and political culture both in Egypt and elsewhere.

Writing from the perspective of a recently retired ambassador with extensive Arab regional experience, Robert Bowker discusses the potential impact of systemic resistance to pressures for greater transparency, accountability and political reform amid ongoing demographic, educational and generational changes. His analysis encompasses the military and security services, the influence of the shadow state and the impact of social surveillance, coercion and corruption. Looking ahead, he discusses emerging business models, returning Arab expatriates, the gradual empowerment of women and the impact of Islam. He considers the political sustainability of economic reform, including the challenges facing marginalized groups. His analysis concludes by reviewing the regional security and political context of reform, the importance of political leadership over the coming decade and the role of external parties.

Compelling, insightful and thought-provoking, the book provides a balanced but cautiously optimistic assessment of Egypt’s prospects. It is essential reading for those concerned about the outlook for state and society in Egypt and in other Arab countries.
Critical Acclaim
‘The situation unfolding in Egypt and elsewhere in the Arab Middle East has important implications for the future of the Arab political order. For the first time, a secular but inclusive political alternative to Islamism has emerged. It has captured the political imagination of the emerging Arab middle class. It will shape the regional security environment. Its consequences are unpredictable – but the greatest risk to the region is the marginalization and alienation of a movement that has raised and galvanized its political horizons.’
– Robert Bowker

In his book Egypt and the Politics of Change in the Arab Middle East, Professor Robert Bowker argues that if regimes fail to address effectively the demands for empowerment of its educated youth, they face the prospect of a tsunami-like current of instability and regression.

‘Ambassador Bowker’s new book achieves the challenging objective of making a contribution to scholarship on Egypt and the Arab world while being accessible to a general audience. He addresses the key drivers of change, such as globalization and Islamicization, and the entrenched attitudes, behavior and institutions they confront. Drawing upon an impressive array of empirical information, case studies and first hand observations, he both illustrates and assesses the contending forces and the likely outcomes of their confrontations.’
– Robert Springborg, Naval Postgraduate School, Monterey, US

‘[This book is] certain to be a valued and respected addition to the literature on the eve of a potentially transformational moment in Egyptian history and thus possibly for the Arab world as well.’
– Jerrold D. Green, Pacific Council on International Policy, Los Angeles, US

‘In this illuminating and informed book, Robert Bowker tackles the prospects for change in the contemporary Arab world. He persuasively argues that while long-term demographic, educational, and social transformations pose formidable challenges for the future, the important issues of political reform, Islamism, and regional security are contestable. The message that this book so engagingly conveys is that change is both inevitable and not necessarily to be feared. It is a refreshingly constructive, and timely, reminder for all who would see the “new Middle East” as destined to be volatile and precarious.’
– James Piscatori, Durham University, UK

‘Dr Bowker’s study provides the best encapsulation and explanation of changes in the Arab world’s social and economic landscape in an age of faster and deeper interdependence. Measured and sober in its analysis, and challenging in its conclusions, it should be read by all those who want to have a better understanding of the Middle East in general, and Egypt in particular.’
– Amin Saikal, The Australian National University
Contents
Contents: Foreword by Jerrold D. Green Preface Introduction: Arab Middle East States and Societies in Transition 1. Getting to Grips with Globalization: Differentiation and Integration in the Arab Middle East 2. Middle East Arab States and Society: Fragmentation and Change 3. Political Reform in Egypt 4. Islam, Globalization and the Outlook for the Arab Middle East 5. The Sustainability of Economic Reform: Governments, Social Contracts and Marginalized Groups 6. Outlook: Demography, Democracy, Dinosaurs and Diplomacy Bibliography Index
Add to Wish List
eBook for individuals
978 1 84980 512 4
From $40.00
Click here for options
eBook for library purchase
978 1 84980 512 4
View sample chapter and check access on: