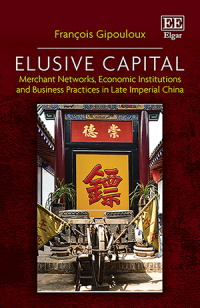 Focusing on the operating modes of three major regional trading networks active in Fujian, Huizhou, and Shanxi from the sixteenth to the nineteenth centuries, François Gipouloux assesses the driving forces behind their dynamism, the role they played in Chinese economic development, and the constraints in which they were embedded. Examining merchants’ business practices, partnerships, and investment strategies, chapters portray the three central figures of China’s economy – the financier, the middleman, and the business entrepreneur – and their complex relationships with the imperial bureaucracy. By analysing the divergent trajectory of seemingly identical institutions in China and Europe, Elusive Capital takes a comparative approach to shed light on the factors that inhibited the transformation of commercial development into an industrial revolution, ultimately discovering why capital accumulation proved so elusive in late imperial China.

Revealing novel insights from primary documentation including trial accounts, Elusive Capital will prove an invigorating read for students and scholars of economic history, business studies, and Asian urban and regional studies
Critical Acclaim
‘Examining the details of three major Chinese merchant groups between the 14th and 19th centuries, Professor Gipouloux compares and contrasts the Chinese model of wealth accumulation with the European model of capital concentration. The insightful archival analysis and references provide us with historical clues to discuss the contemporary world economy.’
– Hamashita Takeshi, University of Tokyo, Japan

‘Few historical topics are as timely as late imperial China’s commercial economy, and few Western scholars have penetrated its mysteries as successfully as François Gipouloux. Read with pleasure his disclosures on such vital topics as brokers, maritime trade, Shanxi merchant operations, and capital movement, and feel grateful for his generous erudition.’
– Joseph P. McDermott, University of Cambridge, UK

‘This book will not only be applauded as an expert’s contribution to the economic history of imperial China but will appear on the bibliographies of a growing community of global historians who wish to include Chinese commercial history as highly significant for our understanding of mercantile agency, institutions and developments for transitions to modern economic growth.’
– Patrick Karl O'Brien, University of London and London School of Economics, UK
Contents
Contents: 1. Introduction: comparative economic history and the trajectory of economic institutions 2. The city and the merchant 3. Regional merchant networks 4. The figure of the intermediary: brokers, merchant manufacturers and guilds 5. Ultra-marine trade: forms, structures and actors 6. Partnerships, company, contracts and risk management in overseas trade 7. Capital mobilization, human capital development and shareholding 8. The elusive capital 9. The decline of regional merchant networks 10. Conclusion: fragile prosperity and the matter of divergence Bibliography Index
Add to Wish List
eBook for individuals
978 1 80088 990 3
From $40.00
Click here for options
eBook for library purchase
978 1 80088 990 3
View sample chapter and check access on: