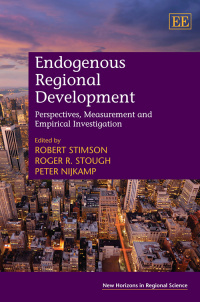 More Information
Critical Acclaim
Contributors
Contents
More Information
Increasingly, endogenous factors and processes are being emphasized as drivers in regional economic development and growth. This 15 chapter book is unique in that it commences by presenting five disciplinary takes on endogenous development from the perspectives of economics, geography, sociology, planning and organizational management.

Several chapters demonstrate how researchers have developed operational models to investigate the roles played by endogenous factors in regional economic development, including the role of entrepreneurial rents. Further chapters provide empirical investigations of endogenous factors in regional development at various levels of spatial scale – from the supra-region to the nation, city and small town – and in a variety of situational settings, including the European Union, Asia and Australia.

5. Rural, Urban or Regional Endogenous Development as the Core Concept in the Planning Profession
Edward Blakely

11. Macroeconomic and Territorial Policies for Regional Competitiveness: Theory and Empirical Evidence from the EU
Roberto Camagni and Roberta Capello

14. Economic Development Incentives and the Measurement of Local Endogenous Growth: Is There a Need for Modeling Adjustment?
Terry Clower