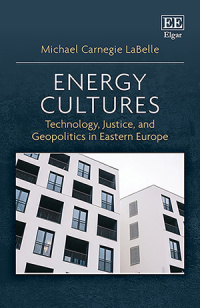 9781788975759 Edward Elgar Publishing
Michael Carnegie LaBelle, Associate Professor, Department of Environmental Sciences and Policy, and Department of Economics and Business, Central European University, Hungary
Publication Date: 2020 ISBN: 978 1 78897 575 9 Extent: 192 pp
This thought-provoking book explores the concept of energy cultures as a means of understanding social and political relations and how energy injustices are created. Using Eastern Europe as an example, it examines the radical transition occurring as the region leaves behind the legacy of the Soviet Union, and the effects of the resulting power struggle between the energy cultures of Russia and the European Union.

More Information
Critical Acclaim
Contents
More Information
This thought-provoking book explores the concept of energy cultures as a means of understanding social and political relations and how energy injustices are created. Using Eastern Europe as an example, it examines the radical transition occurring as the region leaves behind the legacy of the Soviet Union, and the effects of the resulting power struggle between the energy cultures of Russia and the European Union.

In this timely study, Michael Carnegie LaBelle applies an energy justice framework to an analysis of different national energy cultures, exposing both the domestic and international power relations that influence geopolitics in Eastern Europe. He assesses the entire energy value-chain in the region in this context, providing a radical critique of power dynamics within the energy system with the aim of fostering a just energy transition.

Scholars interested in energy justice, conflict, policy and culture from across disciplines including law, politics, public policy, sociology and geography will find this book a fascinating read. It will also be useful to scholars of international relations and geopolitics for its analysis of the impact of EU energy policy on the countries examined, as well as of the relationship between the EU and Russia.

Critical Acclaim
‘Energy Cultures: Technology, Justice, and Geopolitics in Eastern Europe is a great endeavour to decipher the juncture research area created at the intersection of energy and culture in a highly dynamic region. As the concept of energy cultures is not new, what sets LaBelle’s work apart is the critical direction emerged from the complex narrative explored in each of the three case studies. The result reveals an accessible account of energy transition from a challenging and particular perspective. The literature benefits greatly from LaBelle’s endeavour and from his decision to tackle the topic within the Ostwald’s construction of energetics. The major winners however are the book’s readers, regardless of their area of expertise, specialization level and regional interest. Within the energy cultures framework, everyone has a moral duty to attend to the development of an energy efficiency system and the book inspires to such a goal.’
– Alexandru Gavriș, Eurasian Geography and Economics

'LaBelle's unique book is a herculean effort of research, writing and balancing the thin line of central European politics. Meticulously researched, masterfully written and politically just, this exciting new volume provides an important contribution to the literature on energy justice and transition in central and eastern Europe. This commanding work is relevant, interesting and a necessary read for all those interested in Europe's energy future.'
– Tina Soliman Hunter, Macquarie University, Australia

‘Michael Carnegie LaBelle’s book is a great contribution to understanding how societal values, norms and practices shape the physical energy realities in Eastern Europe. Energy Cultures points to a crucial aspect determining the unfolding energy transformation in the region, from everyday practices to geopolitics.’
– Andreas Goldthau, University of Erfurt, Germany

‘This is a welcome exploration into energy culture in Eastern Europe, and combines the unique and growing perspective of energy justice in the analysis. It is written by one of the most esteemed professors working in energy policy across Eastern Europe at this moment and will be of immense value for a whole range of interdisciplinary scholars. A highlight is the interactive analysis that focuses on Hungary, Poland and Lithuania and the energy challenges ahead!’
– Raphael Heffron, University of Dundee, UK

‘This book offers a novel and comprehensive perspective on the intersections among energy justice and political transformation in a part of the world that has experienced – and is continuing to experience – rapid economic and infrastructural change. It is a state-of-the-art resource for the wide range of scholars and practitioners interested in these topics, in the region and beyond.’
– Stefan Bouzarovski, University of Manchester, UK
Contents
Contents: Preface 1. Introduction: Energy culture in an age of transformation 2. Combustion of Energy Cultures in Eastern Europe 3. Lithuania: The Lithuanian Battle for the Independence 4. Hungary: The Geopolitics of household utility bills 5. Poland: The other side of the European energy transition 6. The power of energy cultures 7. Justice and Equity in the Energy System 8. Conclusion: Building a culture of justice in the energy transition References Index