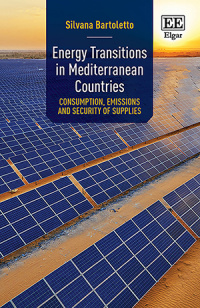 Consumption, Emissions and Security of Supplies

More Information
Critical Acclaim
Contents
More Information
This illuminating book analyses energy transitions, carbon dioxide emissions and the security of energy supply in Mediterranean countries. Unpacking the history of energy transitions, from coal to oil and natural gas, and from non-renewable to renewable energy sources, Silvana Bartoletto offers a comparative approach to the major trends in energy consumption, production, trade and security in Mediterranean countries in Europe, the Middle East and North Africa.

Chapters illustrate the key similarities and differences between Mediterranean countries that have influenced energy supply and consumption patterns. Tracing economic convergence in the last century and highlighting its impact on energy consumption and carbon dioxide emissions, this timely book offers critical insights into the problems of energy dependency and security in areas of political turmoil, as well as crucial insights into the future of the energy crisis. It concludes with a look to the future of energy consumption in the age of climate change and the slow but critical transition to renewable sources.

Enlightening and provocative, this book is key reading for scholars of political science and economics engaged with energy production and consumption, as well as those studying climate change. Its historical insights and overview of significant energy trends will also be useful for policymakers and climate scientists.

Critical Acclaim
‘The Mediterranean region has been a crossroads for economic, political and cultural influences for centuries. This pivotal role intensified with the discovery of oil in the Middle East. Now, with the pressure for economies to decarbonise and the collapse in the cost of generating solar power, a new chapter in its history is emerging. Bartoletto draws on her deep knowledge of the history of energy markets and policies in Mediterranean countries to produce a stimulating, timely and important book. Focussing on issues of fuel production, supply security and energy transitions, Bartoletto identifies the key transformations, tensions and inequalities in the region’s energy systems over the last two centuries, with a view to informing how they will play out in the next few decades. This book is essential reading for all analysts and scholars concerned about the history and geography of energy markets and policies, and about the evolving role of the Mediterranean region in the global economy.’
– Roger Fouquet, London School of Economics, UK
Contents
Contents: Introduction 1. Economy and energy in Mediterranean countries 2. Price dynamics, production and trade 3. Past and present of energy security in Mediterranean countries 4. Energy transitions and energy efficiency 5. Renewables and CO2 emissions Conclusions Index