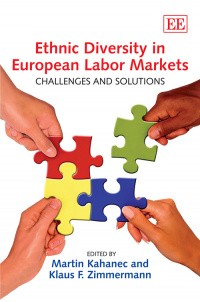 The contributors present an unprecedented large-scale study on ethnic diversity in European labor markets via a combination of hard data analysis with expert evaluation of integration practices and policy options. Key questions explored include:

• Does ethnic diversity in European labor markets lead to poor socio-economic outcomes for some ethnic groups in the face of fierce competition for jobs and welfare?
• Can labor immigration and improved integration of all ethnic groups provide a solution to the challenges posed by a shrinking population, an aging workforce, skill shortages and other bottlenecks that constrain the innovative potential of the EU?
• What can policy makers do to nurture and encourage the benefits of ethnic diversity in the EU?


This indispensable guide will be warmly welcomed by academics, students, policy makers, analysts and researchers with an interest in economics, European studies and labor studies. It will be especially insightful for those with a particular commitment to managing ethnic diversity in European labor markets.
Critical Acclaim
‘Kahanec and Zimmermann have put together a volume that destroys the myth that science and policy making cannot be bridged. In an accessible way, but deeply rooted in rigorous science, they provide a handbook for policy makers working in the field of inclusion and integration of ethnic minorities. They identify key policy challenges, address the question of what minorities want, and propose a policy agenda of how to get there.’
– Prof. Dr. Dr. h.c. mult. Rita Süssmuth, Chair of the European Union’s High Level Group on 'Social Integration of Ethnic Minorities and their full Participation in the Labor Market' (2006 – 2007)

‘Kahanec and Zimmermann have produced a remarkably useful and accessible volume that everyone who is curious about, let alone interested in, the labor market situation of ethnic (and immigrant) minorities in the European Union must read. The editors have been imaginative in their use of multiple data systems and methodologies to tell a story that researchers and policy makers alike will find useful, even compelling. The result is a volume full of hard-to-find comparative analysis and policy insight about the labor market incorporation, or rather, the absence of it, of minorities, but also of what works (and what does not) in ethnic minority integration policies and why. The editors have painted on a vast canvas, with evidence that covers most of the Union. Impressively, and innovatively, however, they have also included detailed case studies for fully ten of the Union’s member states, including some of the EU’s most important and dynamic economies, such as Germany, the Netherlands, France, and Spain.’
– Dr. Demetrios G. Papademetriou, President and Co-Founder of the Migration Policy Institute (MPI)
Contributors
Contributors: A.F. Constant, S. de la Rica, D. Fougère, V. Gheţău, T.J. Hatton, M. Hazans, M. Kahanec, Z. Kántor, P.J. Pedersen, M. Vašečka, H.D. von Loeffelholz, A. Zaiceva, K.F. Zimmermann
Contents
Contents:

3. The Practice of Minority Integration in the European Union: What Works
Martin Kahanec

5. Social and Labor Market Integration of Ethnic Minorities in France: Has the French Integration Model Broken Down?
Denis Fougère

7. Ethnic or Social Integration? The Roma in Hungary
Zoltán Kántor

13. The Social and Labor Market Outcomes of Ethnic Minorities in the UK
Timothy J. Hatton

Research Handbook on the Sociology of Organizations