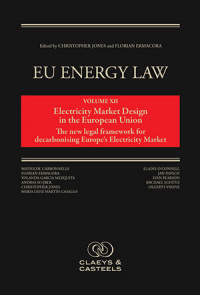 This new volume, written by all the key Commission officials responsible for drafting, negotiating and now implementing this major new piece of legislation is essential reading for all those involved in the regulation and development of Europe's electricity industry.

At the end of 2018 the EU agreed a wholesale overhaul of EU electricity laws with the 'Electricity Market Design' package. The aim of this package is to bring EU electricity law up to date, taking account of its aim to become completely decarbonised by 2050, and to deal with the rapidly increasing level of intermittent renewable electricity in the network.
The share of electricity produced by renewable energy sources is expected to grow to more than 50% in 2030. With this in mind, the electricity market design framework has been modernised to deal with intermittency, with new provisions on storage, capacity mechanisms (introducing a new emissions limit for power plants eligible to receive subsidies) and demand response.

In addition, the role of consumers in the future electricity market has been re-thought and incorporated in the Electricity Market Design, providing the right incentives for consumers to become more active and to contribute to keeping the electricity system stable, as well as new consumer rights.
In order to increase the resilience of the EU electricity system, each EU country is in the future required to define Risk Preparedness plans to be ready to respond to unexpected situations, working closely with neighbouring member states.

The new rules will be supported by a stronger role for the ACER Agency, which coordinates work among national energy regulators, providing additional powers and responsibilities, and thus ensuring that decisions are taken for making best use of an integrated EU energy market to the benefit of all EU citizens.