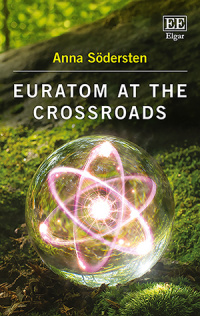 Euratom at the Crossroads

9781788112246 Edward Elgar Publishing
Anna Södersten, Senior Researcher, Swedish Institute for European Policy Studies, Stockholm, Sweden
Publication Date: 2018 ISBN: 978 1 78811 224 6 Extent: 272 pp
This book addresses the contentious debate surrounding the future of the European Atomic Energy Community Treaty (Euratom), one of the European Union’s founding treaties. Arguing that it has remained at a ‘crossroads’ since its adoption in 1957, Anna Södersten explores the issue of whether the treaty should be kept separate from the EU, or be brought within its framework.

More Information
Critical Acclaim
Contents
More Information
Addressing the contentious debate surrounding the future of the European Atomic Energy Community Treaty (Euratom), Anna Södersten offers one of the first examinations of Euratom from an institutional and structural perspective, and in doing so, investigates the legal implications of its continued separate existence.

Using primary material as key sources for analysis, as well as examining all of the treaty’s titles, this book explores the relationship between Euratom and two other core EU treaties, the Treaty on European Union (TEU) and the Treaty on the Functioning of the European Union (TFEU). In considering whether it is still relevant that one of the EU’s founding treaties is the promotion of nuclear energy, Södersten concludes that there is no need for the Euratom as a separate treaty.

Euratom at the Crossroads will be essential reading for scholars in the fields of EU institutional law and EU energy law. EU officials and practitioners in the field of energy law, at national legislatures and regulator authorities, will find this indispensable reading.
Critical Acclaim
‘The book offers brilliant legal analysis in the area of the TEAEC. It touches on many issues that reflect the hot questions in legal literature. This is an exhaustive work that is worth recommending to all those who study EU law.’
– Marek Rzotkiewicz, Polish Review of International and European Law

‘Euratom at the Crossroads makes a valuable contribution to the current debate on the future of EU law. The author has clearly succeeded in her goal of providing detailed analysis of the complex legal framework established under the Euratom Treaty. Taking into account the relative lack of scientific literature on Euratom, this book rightly aspires to become a handbook on Euratom’s issues for the next decades.’
– Jakub Handrlica, International Energy Law Review

‘Euratom has always been the least visible of the European Communities, yet its impact on European integration cannot be underestimated. Anna Södersten rightfully draws renewed attention to the many fascinating competences and activities of Euratom. Many familiar EU law questions return, including the division of competences between the organization and its Members, the choice of legal basis and the extensively developed external relations. Euratom at the Crossroads should be seen as a leading book on a European organisation that deserves more attention in the academic field.’
– Ramses A. Wessel, University of Twente, the Netherlands

‘This book is devoted to the most neglected actor under European Law: the European Atomic Energy Community Treaty (Euratom). It explores the terra incognita of Euratom from its beginnings in the 1950s to today’s post-Fukushima era, while also focussing on Euratom’s specific role in its relationship with the European Union. Written with great thoroughness and unbiased scholarship, Anna’s book will be the standard work of reference on Euratom for a long time to come.’
– Jürgen Grunwald, Saarland University, Germany

‘There is a gap in the legal literature on the rules and procedures that govern Euratom. Anna Södersten’s well set out book provides a comprehensive and informative analysis that enhances our understanding of this area.’
– Panos Koutrakos, City, University of London, UK