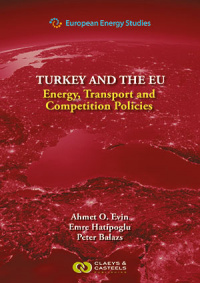 This book moves beyond the ‘identity’ debate between Turkey and the EU, and offers a guide at this critical time for drawing lessons from a rigorous examination of divergence and convergence between the EU and Turkey in three significant policy areas.

Recent developments both in Turkey and its immediate neighbourhood have brought into sharp focus Turkey’s pivotal role in a region that has become increasingly challenging to the EU. These developments, for example, have prompted Ankara to declare more of an independent course of action both domestically and regionally and hasten into a détente with Russia. As a result, considerations of Turkey’s European future have been eclipsed by concerns about Ankara’s preference to aspire to being an independent regional power. Along with those about Turkey’s orientation, time-honored existential questions are being raised again: Is Turkey a border, a buffer, or a bridge between the EU and the Middle East?

This book moves beyond the ‘identity’ debate between Turkey and the EU, and offers a guide at this critical time for drawing lessons from a rigorous examination of divergence and convergence between the EU and Turkey in three significant policy areas. The result of a focused research project conducted by a team of international policy experts from the Central European University (Budapest) and Sabanci University (Istanbul), the studies included in this volume suggest alternative scenarios regarding how Turkey and the EU might jointly develop effective energy, transport, and competition policies, regardless of Turkey’s EU candidacy status.

These studies show how geo-strategic realities ultimately require Turkey to cooperate with the EU on a number of policy issues, despite Ankara’s rhetoric to the contrary. Turkey’s role as an energy supplier to the EU has never been dropped from Ankara’s policy agenda.

More recently, the Turkish government has been announcing how its investments in the third bridge across the Bosporus would help to release untapped potential of land-based trade between Europe and Asia. Regardless of the current divergence of political visions, Turkey’s policy aims, at least in the three policy areas examined, foresee coordination, if not cooperation, with the EU.
Contributors
Contributors: Izak Atiyas, Peter Balazs, Andras Deak, Ahmet O. Evin, Tamás Fleischer, Aybars Görgülü, Emre Hatipoglu, Andras G. Inotai, Csaba Weiner
Add to Wish List