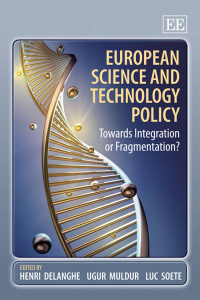 Towards Integration or Fragmentation?

More Information
Critical Acclaim
Contributors
Contents
More Information
This innovative book focuses on the most important concept underpinning current European Union research policy. It describes the history and concept of the European Research Area (ERA), analyses some of the underlying assumptions, assesses some of its achievements, and takes a brief look at its future.

European Science and Technology Policy deals with the notion of the ERA, a coordinated and effective European Research Area, the successful achievement of which is the main objective of EU research policy under the Lisbon Treaty. The book demonstrates that almost ten years after the formal launch of the ERA concept, little top-down progress seems to have been made in terms of achieving better governance of the European research landscape. However, tangible bottom-up progress has been made towards harmonizing research beyond the existing uncoordinated national, intergovernmental and supranational policy schemes.

2. Intergovernmental Cooperation in the Making of European Research
Pierre Papon

4. The ‘European Research Area’ Idea in the History of Community Policy-making
Luca Guzzetti

PART II: THEORETICAL ISSUES
6. From the Lisbon Agenda to the Lisbon Treaty: National Research Systems in the Context of European Integration and Globalization
Robert Boyer

9. ERA and the Role of Networks
Stefano Breschi and Franco Malerba

12. Does the ‘European Paradox’ Still Hold? Did it Ever?
Giovanni Dosi, Patrick Llerena and Mauro Sylos Labini

13. The European Research Area and Human Resources in Science and Technology
Wendy Hansen

15. The Levelling Off of the Integration of European Technology
Dominique Guellec and Hélène Dernis

Elgar Encyclopedia of Technology and Politics

The Economics of Blockchain and Cryptocurrency