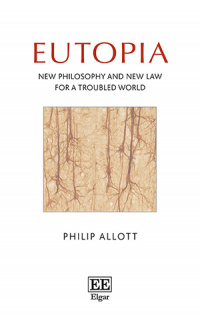 New Philosophy and New Law for a Troubled World

9781785360671 Edward Elgar Publishing
Philip Allott, Professor Emeritus of International Public Law and Fellow of Trinity College, University of Cambridge, UK
Publication Date: 2017 ISBN: 978 1 78536 067 1 Extent: 384 pp
There is a vacuum of philosophy to make sense of a world dominated by a disorderly global economy, by science and engineering, by ideologies, and by popular culture. There is a vacuum of law to bring order to relations between states that are more threatening than they have ever been. Thomas More’s Utopia (1516) re-thought everything in another difficult new world. Philip Allott’s Eutopia (2016) reclaims the best of human thought to empower us in making a better human world.

In 1516, Thomas More, in his book Utopia, contributed to the ancient debate, at another time of profound transformation in the human world. In our own time, we have witnessed a collapse in intellectual life, and a collapse in the theory and practice of education. The old debate is, for all practical purposes, dead.

In 2016, Philip Allott’s Eutopia resumes the debate about the role of philosophy and society and law in making a better human future, responding to a human world that More could not have imagined. And he lets us hear the voices of some of those who contributed to the great debate in the past, voices that still resonate today.

Critical Acclaim
‘Allott’s Eutopia is audaciously ambitious and unconventional in style and content. It seeks no less than to do for the 21st century what Thomas More’s Utopia and Francis Bacon’s Great Instauration did in the English Renaissance: to help bring about a transformation of human self-understanding, overcome fatalism and inertia ultimately grounded in mistaken ideas of the human condition and the limits of human power, and become aware of the permanent possibility of making the human world into a “place of happiness”.’
– Mattias Kumm, Inger Rennert Professor of Law, New York University, School of Law, US

‘No international thinker today offers more profound insights, or offers more challenging questions, on the possibilities for law and philosophy to touch our lives and our world than does Philip Allott. A quarter of a century after publishing Eunomia, Allott unleashes an entirely original, magnificent, challenging and overwhelming book, one that asks us to confront fatalism and to imagine the possibility that thought and ideas have the power to enhance the future of the human.’
– Philippe Sands QC, Professor of Laws, University College London, UK

‘What would happen if you decided to rethink the human condition from the ground up? If you spent a lifetime at it, taking along the works of the greatest minds who tried this before? You might conclude, with Philip Allott, that “the human species will need a revolution – a revolution in the mind – to become what it could be.” And that “we have the power to transform the human world.” Eutopia is the work of a singular mind, a heroically independent thinker who brings the full power of his synthetic intelligence and style to bear in this philosophical tour de force. Allott will entertain you, challenge you, educate you – and you may end up changing the world!’
– David Kennedy, Manley O. Hudson Professor of Law, Harvard Law School, US