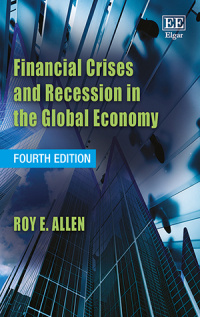 Financial Crises and Recession in the Global Economy, Fourth Edition

9781785361104 Edward Elgar Publishing
Roy E. Allen, Professor of Economics, Saint Mary's College of California, US
Publication Date: 2016 ISBN: 978 1 78536 110 4 Extent: 224 pp
This new edition of Financial Crises and Recession in the Global Economy explores the major financial instabilities and evolutionary trends in the global economy since the 1970s. A learned but accessible book, it is perfect for a broad audience of academics and practitioners but has also been used as a supplementary textbook for courses in international economics, international finance, money and banking, and macroeconomics.

More Information
Critical Acclaim
Contents
More Information
This new edition of Financial Crises and Recession in the Global Economy explores the major financial instabilities and evolutionary trends in the global economy since the 1970s. Financial globalization has produced an expanded money-credit pyramid, increased the risk of crisis, and created and transferred wealth from periphery to core regions.

This book presents some new thinking, which explains the continuing occurrence of large-scale financial crises. Roy E. Allen examines how key financial variables are driven more by psychological and social constructs than is commonly understood and that money and wealth can be created, transferred and destroyed across the global economy independently of the rest of the ‘real’ economy. This new structural relationship between money and the real economy is associated with financial globalization—including, especially, new technologies and governmental deregulation in the ‘explosive 1980s’. A new political economy of financial crisis and a human ecology economics framework are advanced to guide research and policymaking in the future.

This learned but accessible book is meant for a broad audience of academics and practitioners, and has been used as a supplementary textbook for courses in international economics, international finance, money and banking, and macroeconomics.

‘Of 600 books I reviewed on new perspectives on the global economy as a system, this is the one that conveyed the most new information, and plausible explanations for a variety of recent phenomena for which other explanations are unsatisfactory. This is the only book presenting a data-supported theory of the global economic system which connects the real world economy to the new global financial system.’
– Kenneth E.F. Watt, Encyclopedia of Human Ecology

‘. . . the emphasis placed by the author on the international frame as the basic unit of economic analysis and his rejection of equilibrium as the principle informing that analysis make this book much more appropriate for understanding present-day reality than traditional macroeconomic treatises. Such a stance requires intellectual courage. Moreover, in its own terms, this work achieves the purposes it has set itself.’
– G. Carchedi, Review of International Political Economy
Contents
Contents: Introduction 1. Financial Globalization Since the 1970s 2. Financial Instabilities and Trends in the 1980s 3. Financial Instabilities and Trends in the 1990s 4. The 2007- Crisis: Common Patterns and New Thinking 5. A Human Ecology Economics (HEE) Framework for the Analysis of Financial Instability Index