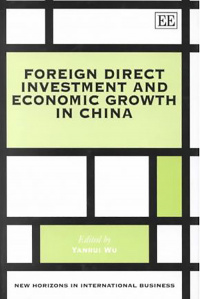 More Information
Critical Acclaim
Contributors
Contents
More Information
Foreign capital has played a fundamental role in China’s development and economic reconstruction during the past two decades. China is now the world’s second largest host for foreign direct investment, outside the United States. This important new book, by a distinguished group of contributors, offers insights into the impact of foreign investment on China’s growth and regional economic development.

Foreign Direct Investment and Economic Growth in China will be of interest to those working in the areas of international business, finance and international economics as well as Asian development and Chinese economic studies.
Critical Acclaim
‘Foreign Direct Investment and Economic Growth in China is an edited compilation of nine papers (plus an introduction), most of which were presented in July 1997 at an international conference on the economics of Greater China. The papers will be of interest primarily to academic economists and policymakers. . .’
– Roger Strange, Asia Pacific Business Review

‘This edited book examines an important area of China’s foreign economic relations – namely, the contribution foreign direct investment (FDI) has made to economic growth in China. . . . The book is a valuable addition to the literature on China’s science and industry policies.’
– Cong Cao, The China Journal