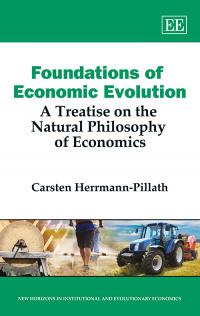 A Treatise on the Natural Philosophy of Economics

Critical Acclaim
Contents
Critical Acclaim
‘This book is an ambitious intellectual enterprise to build a naturalistic foundation for economics, with amazingly vast knowledge of physical, biological, social sciences and philosophy. Readers will discover that approaches and insights emergent in institutional studies, (social)-neuroscience, network theory, ecological economics, bio-culture dualistic evolution, etc. are persuasively placed in a grand unified frame. It is written in a good Hayekian tradition. I recommend this book particularly to young readers who aspire to go beyond a narrowly specified discipline in the age of expanding communicability of knowledge and ideas.’
– Masahiko Aoki, Stanford University, US

‘Carsten Herrmann-Pillath’s new book is an in-depth application of natural philosophy to economics that draws up an entirely new framework for economic analysis. It offers path-breaking insights on the interactions between human economic activity and nature, and outlines a convincing solution to the long-standing reductionism controversy. A must-read for everyone interested in the philosophical underpinnings of economics as a science.’
– Ulrich Witt, Max Planck Institute of Economics, Jena, Germany

‘“Big picture” philosophy of economics drifted into a dull cul-de-sac as it became obsessively focused on falsifiability and rationality. In this book, Carsten Herrmann-Pillath pushes the field back onto the open highway by locating economics in the larger frameworks of metaphysics, evolutionary dynamics and information theory. This is large-scale, ambitious synthesis of ideas of the kind we expect from time to time to see devoted to physics and biology. Why should economics merit anything less? But of course, this kind of intellectual tapestry must await the appearance of an unusually devoted scholar, with special patience and eccentric independence from the pressure for quick returns that characterizes academic life. In the person of Herrmann-Pillath, this scholar has appeared. No one who wants to examine economics whole and in its richest context should miss his virtuoso performance in this book.’
– Don Ross, University of Cape Town, South Africa and Georgia State University, US

‘Herrmann-Pillath’s work attempts to bring to bear upon the discipline of economics perspectives from other discourses which have been burgeoning recently – namely, thermodynamics, evolutionary biology, and semiotics, aiming at a consilience contextualized by economic activity and problems. This marks the work as a contemporary example of natural philosophy, which is now at the doorstep of a revival. The overall perspective is that human economic activity is an aspect of the ecology of the earth’s surface, viewing it as an evolving physical system mediated through distributed mentality as expressed in technology evolution. Knowledge is taken to be “physical” with a performative function, as in Peirce’s pragmaticism. Thus, the social meanings of expectations, prices and credit are found to be rooted in energy flows. The work draws its foundation from Hegel and C.S. Peirce and its immediate guidance from Hayek, Veblen and Georgescu-Roegen. The author generates an energetic theory of economic growth, guided by Odum’s maximum power principle. Economic discourse itself is reworked in the final chapter, in light of the examinations of the previous chapters, naturalizing economics within an extremely powerful contemporary framework.’
– Stanley N. Salthe, Binghamton University, SUNY, US

‘An Oscar-winning performance in the “theatre of consilience”. It’s hard to know which to praise first: Carsten Herrmann-Pillath’s humility or his ambition. He says his book “is not a great intellectual feat” because he pursues the “humble task” of putting together “the ideas of others”. When he finally gets to economics he tries to “be as simple as possible” and to conceive of economics in terms of the basics, at “undergraduate level, so to say”. On the other hand, the scale of his ambition is to rethink the foundations of economics from first principles, while, at the same time, holding a running dialogue between contemporary sciences and classic philosophy. He’s much too modest, of course, because Foundations is a major achievement, but his modesty points to what makes it such a powerful treatise: the book is not about his preferences or prejudices; it is a “scientific approach that aims at establishing truthful propositions about reality”. That is much harder to achieve than grand theories or “complicated mathematics,” because it amounts to a new modern synthesis of the field – an achievement on a par with Julian Huxley’s, whose own modern synthesis of evolutionary theories in the 1940s allowed for the explosive growth of the biosciences over the next decades. The structure of the book is simple enough, providing a framework for the “naturalistic turn” in economics. Starting from material existence, causation and evolution, Herrmann-Pillath takes us through four fundamental concepts – individuals, networks, institutions and technology – before coming finally to the “realm of economics proper,” i.e. markets. However, Herrmann-Pillath believes that the “foundations of economics cannot be found within economics” but only in dialogue with other sciences, or what he calls the “theatre of consilience”. It’s a theatre in which various characters come and go, where dialogue ebbs and flows, conflicts arise and are resolved, and where individual actions can be seen as concepts as, leading to higher levels of meaning as the plot unfolds. The magic of theatre, of course, is that the point of intelligibility, where the characters, actions and narrative resolve into meaningfulness, is projected out of the drama itself, into the spectator. That’s you, dear reader. So it is with economics as a discipline. Economics is a player in a much larger performance about what constitutes knowledge, and how we know that. It is also a player in the economy it seeks to explain. To understand why money, firms, growth, prices, markets and other staples of economic thought emerge and function the way they do, it is necessary situate the analysis beyond economics (and the economy), and to engage with developments across the human, evolutionary and complexity sciences. This is what Herrmann-Pillath does, analyzing a breathtaking range of illuminating and sometimes challenging work along the way. We are treated to new ideas about the externalized brain, the evolution of knowledge in the Earth System (i.e. not just among humans), the role of signs and performativity in these processes, as well as that of “energetic transformations.” But Herrmann-Pillath is not satisfied with the “modest” task of bringing the best of modern scientific thought to bear on economic concepts and performances; he really does harbor a deeper purpose. The clue is in his apparently quixotic desire to hang on to philosophical insights associated with pre-evolutionary thinkers like Aristotle and Hegel, and his apparently eccentric desire to place the semiotic philosophy of C.S. Pierce at center stage. But the patient observer will see that he is not seeking to change the facts by imposing idealist notions on them after the event. Instead, he is arguing for a change in the way we perform ourselves in the face of these facts. He is looking for a modern-day equivalent of Confucius or Socrates: one who can imagine values and beliefs that “define the human species in a new way.” For those who have eyes to see, as the drama unfolds, it may be that we have found such a figure in Carsten Herrmann-Pillath himself, modesty, ambition and all. This is “Cultural Science” as it should be done.’
– John Hartley, Curtin University, Australia and Cardiff University, UK
Contents
Contents: Preface 1. Ontology 2. Causation 3. Evolution 4. Individuals 5. Networks 6. Institutions 7. Technology 8. Markets References Index
Add to Wish List
eBook for individuals
978 1 78254 836 2
From $40.00
Click here for options
eBook for library purchase
978 1 78254 836 2
View sample chapter and check access on: