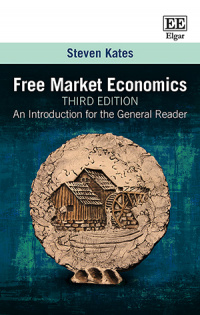 An Introduction for the General Reader

9781786431387 Edward Elgar Publishing
Steven Kates, Senior Fellow, Centre for Labour Market Research, University of Canberra, Australia
Publication Date: 2017 ISBN: 978 1 78643 138 7 Extent: 480 pp
If you are genuinely interested in what is wrong with modern economics, this is where you can find out. If you would like to understand the flaws in Keynesian macro, this is the book you must read. If you are interested in marginal analysis properly explained, you again need to read this book. Based on the classical principles of John Stuart Mill, it is what is missing today; a text based on explaining how an economy works from a supply-side perspective.

More Information
Critical Acclaim
Contents
More Information
In this thoroughly updated third edition of Free Market Economics, Steven Kates assesses economic principles based on classical economic theory. Rejecting mainstream Keynesian and neoclassical approaches even though they are thoroughly covered in the text, Kates instead looks at economics from the perspective of an entrepreneur making decisions in a world where the future is unknown, innovation is a continuous process and the future is being created before it can be understood.

• analysis derived from the theories of pre-Keynesian classical economists, as this is the only source available today that explains the classical pre-Keynesian theory of the business cycle

• offers an introductory understanding, accessible to the non-specialist reader.

The aim of this book is to redirect the attention of economists and policy makers towards the economic theories that prevailed in earlier times. Their problems were little different from ours but their way of understanding the operation of an economy and dealing with those problems was completely different.

Free Market Economics, Third Edition will help students and general readers understand classical economic theory, written by someone who believes that this now-discarded approach to economic thought was superior to what is found in most of our textbooks today.

Please see the companion site at https://www.e-elgar.com/textbooks/kates
Critical Acclaim
‘This book presents the very embodiment of supply-side economics. At its very core is the entrepreneur trying to work out what to do in a world of deep uncertainty in which the future cannot be known. Crucially, the book is entirely un-Keynesian, restoring Say’s Law to the centre of economic theory, with its focus on value-adding production as the source of demand. If you would like to understand how an economy actually works, this is one of the few places I know of where you can find out.’
– Arthur B. Laffer, Laffer Associates, US

‘A refreshing theoretical counterattack to the established Keynesian world view that has left the West financially overpromised, disastrously broke, and vulnerable to crank ideas. Professor Kates has brilliantly resurrected Say’s law of markets – Keynes’s old nemesis – into a new modern framework that forms the foundation of a new sustainable economy.’
– Mark Skousen, editor, Forecasts & Strategies and formerly of the Columbia Business School, US

‘Steven Kates has written an exciting new book on the basics of economics. He avoids the dry and unrealistic assumptions of most introductions to economics. He puts change, entrepreneurship, uncertainty, decentralized knowledge and spontaneous order at the center of his analysis. The reader will profit from this fresh approach far more than from an ordinary textbook. This is a treatment for the general reader that both respects and engages one’s intelligence.’
– Mario J. Rizzo, New York University, US

‘Steve Kates, an academic with business experience, does away with the unrealistic abstractions that make economics inaccessible to general readers. This book is about real, enterprising people with whom we can identify, and about how ordinary economic life evolves in conditions of uncertainty. We learn why vacuous modelling only misleads us and why economic freedom and secure institutions are essential to achieving the good life.’
– Wolfgang Kasper, University of New South Wales, Australia


Contents
Contents: Introduction 1. The axioms and underlying principles of a free market economy 2. The economics of the free market 3. Value added 4. Governments and the market 5. Factors of production, finance, innovation and the role of the entrepreneur 6. Supply and demand 7. Supply and demand: beyond equilibrium 8. Marginal analysis 9. Measuring the economy 10. An interlude on the history of economics 11. The Keynesian Revolution and Say’s Law 12. The basic Keynesian macroeconomic model 13. Aggregate demand and aggregate supply 14. The classical theory of the business cycle 15. Cyclical activity and governments 16. Savings and the financial system 17. Controlling inflation Index