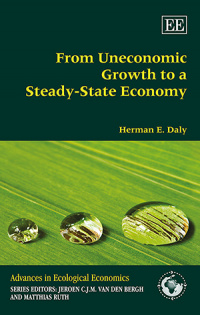 9781783479955 Edward Elgar Publishing
Advances in Ecological Economics series
The late Herman E. Daly, formerly Emeritus Professor, School of Public Policy, University of Maryland, US and Winner of the 2014 Blue Planet prize
Publication Date: 2015 ISBN: 978 1 78347 995 5 Extent: 272 pp
In this important book, Herman E. Daly lays bare the weaknesses of growth economics and explains why, in contrast, a steady-state economy is both necessary and desirable. Through the course of the book, Daly develops the basic concept and theory of a steady-state economy from the 1970s limits to growth debates. In doing so, he draws on work from the classical economists, through both conflicts and agreements with neo-classical and Keynesian economists, as well as recent debates on uneconomic growth.

Contents
Contents: Preface 1. Introduction : Envisioning a Successful Steady-State Economy Part I: Early Discussion of Basic Steady-State Concepts 2. The Economics of the Steady State 3. In Defense of a Steady-State Economy Part II: Later Extensions into Standard Economics 4. Towards an Environmental Macroeconomics 5. Growth, Debt, and the World Bank Part III: Recent Revival of the Growth Debate, and Policies for a Steady State 6. A Further Critique of Growth Economics 7. Moving from a Failed Growth Economy to a Steady State Economy 8. Climate Policy: From “Know How” to “Do Now” Part IV: Ethical Foundations of a Steady-State Economy 9. Incorporating Values in a Bottom–Line Ecological Economy 10. Ethics in Relation to Economics, Ecology, and Eschatology Part V: Short Essays on Current Issues Related to Growth versus Steady State Index
Add to Wish List
eBook for individuals
978 1 78347 997 9
From $42.36
Click here for options
eBook for library purchase
978 1 78347 997 9
View sample chapter and check access on: