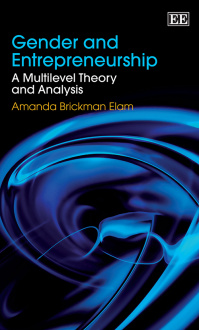 A Multilevel Theory and Analysis

9781847208293 Edward Elgar Publishing
Amanda Brickman Elam, Visiting Scholar, Babson College, US and former Postdoctoral Fellow, Queensland University of Technology, Australia
Publication Date: September 2008 ISBN: 978 1 84720 829 3 Extent: 136 pp
This book examines three distinct contributions to the study of entrepreneurship. Firstly, it contributes to both sociological and institutional theories of entrepreneurship and the entrepreneur. Secondly, it presents a cross-national comparative framework for the multilevel analysis of entrepreneurship. Finally, this book produces a key multilevel finding with regard to the importance of national gender beliefs for the likelihood of business creation among both men and women.

Gender and Entrepreneurship will be an invaluable tool for researchers and policymakers interested in testing assumptions about the importance and influence of key national factors on rates of entrepreneurial activity.
Critical Acclaim
‘This book is a clear and succinct documentation of what seems to me to be the first leg in a journey to search for superior theoretical explanation for inter-country gender differences in entrepreneurship, by a researcher with a “passion for social theory”. The journey has been a fruitful one with firm steps in the right direction. Elam has highlighted important signposts for those interested in embarking on similar journeys by demonstrating that neo-institutional sociological insights coupled with multilevel analysis has much to offer. It appears also that Amanda Brickman Elam is already planning a second leg of the journey with future research ideas outlined in the preface of the book. I will watch the space!’
– Anne de Bruin, International Small Business Journal

‘. . . Amanda Elam’s masterly cross-national study from which she develops her multi-level theory of gender and entrepreneurship is an important contribution. . . She provides some fascinating findings about the macro- and micro-level factors that cause cross-national (and hence cross-cultural) differences – and specific variations by gender – in business start up rates. . . The book is aimed at both an academic and policy audience, although I would go further than the publishers and advocate its use with students – and not just research active staff at universities – because it shows not only the relationship between entrepreneurship and gender, but also the cross-national differences and the sorts of macro- and micro-level factors that influence these variations. Since I write in this research area, I have certainly learnt much from this concise little gem of a book. . . The main strength about this book is that, despite its ambitious and far-reaching theme, Dr Elam has managed to articulate, support, methodise, and test her theory in such a short volume and this is achieved without losing any of the key messages or elements. In fact, she has précised the book exceptionally well in the preface, too, and the supreme organisation of the book means that it is coherent and flows well. Similarly, the quantitative analysis is complex, but is presented in clear language that does not confuse the reader. . . this is a timely and important book. While bearing in mind the limitations of a large-scale empirical study, it is nonetheless one that is grounded in an exemplary manner on a vast body of literature from sociological, anthropological, management and other fields. . . it is certainly value for money given the quality of its findings and the relevance of this work for the gendered entrepreneurship field, but also more generally for those academics and other stakeholders who are interested in this particular issue.’
– J.M. Scott, International Journal of Entrepreneurial Behavior and Research
Contents
Contents: Preface 1. Introduction 2. A Practice Theory View of Social Difference 3. A Multilevel Theory of Gender and Entrepreneurship 4. Some Cross-National Findings 5. Conclusion and Implications Appendix: Data and Methodology References Index
Add to Wish List

A Field Guide to Managing Diversity, Equality and Inclusion in Organisations

The Role of Ecosystems in Developing Startups