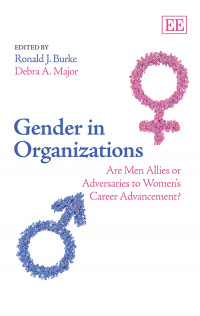 Are Men Allies or Adversaries to Women’s Career Advancement?

9781781955697 Edward Elgar Publishing
Edited by the late Ronald J. Burke, formerly Professor Emeritus, Schulich School of Business, York University, Canada and Debra A. Major, Professor of Psychology and Associate Chair for Research, Old Dominion University, Norfolk, Virginia, US
Publication Date: 2014 ISBN: 978 1 78195 569 7 Extent: 456 pp
Diversifying the workforce is becoming increasingly important, with gender equality being a central feature of overall equality. Men seem to be part of the problem and a necessary part of the solution. This collection ties these themes together in the context of talent management and organizational effectiveness.

More Information
Critical Acclaim
Contributors
Contents
More Information
Diversifying the workforce is becoming increasingly important, with gender equality being a central feature of overall equality. Men seem to be part of the problem and a necessary part of the solution. This collection ties these themes together in the context of talent management and organizational effectiveness.

Talented women continue to have difficulty advancing their careers in organizations wordwide. Organizations and their cultures were created by men, for men and reflect the wider patriarchal society. As a consequence, some women are disadvantaged and face barriers to advancement. Burke and Major present an examination of men, masculinity and gendered organizational cultures to get both a better understanding of why women have made such slow progress and ways in which men can become allies and champions of women, supporting their advancement and workplace equality.

By taking an unusual approach to the subject of gender equality, this topical book will be a refreshing read for students and academics. It will be of great use to human resource practitioners, managers, policymakers and employers at every level.
Critical Acclaim
‘This rare and insightful compilation brings a unique and relatively understudied perspective to the extant gender in management/leadership literature: the role of men in fostering gender equality. The chapters provide rich discussions of gendered organizational cultures, male privilege, masculinities at work and their consequences, and how men can serve as allies to women’s advancement and development on a number of fronts including redesigning work supports for improved work–life integration, preventing violence against women and girls, dismantling discrimination, and forestalling backlash.’
– Diana Bilimoria, Case Western Reserve University, US

‘A book on gender in organisations usually focuses on women. This one doesn’t. Men and masculinities play centre stage in explaining how women (and sometimes men) are disadvantaged at work. The book does not position men as the bad guys. There are many examples of how men act as allies to women. A novel approach and a welcome addition to gender scholars. A great read!’
– Susan Vinnicombe, OBE, Cranfield University, UK and Simmons University, US

4. The Imperative for Servant Leadership: Reflections on the (Enduring) Dysfunctions of Corporate Masculinity
Mark Maier

7. The Causes and Consequences of Workaholism
Shahnaz Aziz and Benjamin Uhrich

9. Is This a Man’s World? Obstacles to Women’s Success in Male-typed Domains
Suzette Caleo and Madeline E. Heilman

PART IV: MEN AS ALLIES: SIGNS OF PROGRESS
15. How Can Men and Women be Allies in Achieving Work–Family Balance? The Role of Coping in Facilitating Positive Crossover
Michael L. Litano, Dante P. Myers and Debra A. Major