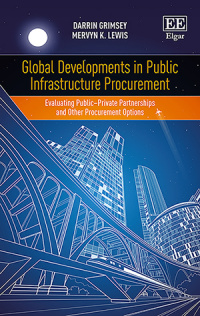 9781848446304 Edward Elgar Publishing
Darrin Grimsey, Partner, Infrastructure Advisory, EY, Australia and Mervyn K. Lewis, Emeritus Professor, University of South Australia and Emeritus Fellow, Academy of the Social Sciences in Australia
Publication Date: 2017 ISBN: 978 1 84844 630 4 Extent: 360 pp
There is widespread acceptance of the importance of infrastructure, but less agreement about how it should be funded and procured. While most public infrastructure is still provided in-house or by traditional procurement methods – with well-researched strengths and weaknesses – the development of service concession arrangements has seen a greater emphasis on lifecycle costing, risk assessment and asset design as featured in a variety of public private partnership (PPP) delivery models. This book examines the various procurement approaches, and provides a framework for comparing their advantages and disadvantages. Drawing on international experience, it considers some of the best and worst examples of PPPs, and infrastructure projects generally, along with the lessons for improving infrastructure procurement processes.

More Information
Critical Acclaim
Contents
More Information
This book provides an up-to-date study of public infrastructure in terms of the selection, procurement and delivery of projects. There is widespread acceptance that infrastructure is vital and needs increasing, yet less agreement about how it should be funded and procured. This book assesses in detail the features of various procurement options while also providing a framework for comparing their advantages and disadvantages.

Drawing on international experiences and case studies, Darrin Grimsey and Mervyn Lewis consider some of the best and worst examples of public–private partnerships, new funding methods and infrastructure megaprojects. By offering a conceptual basis for infrastructure decision-making, the authors identify ways to improve infrastructure procurement processes. Focusing on urbanization as a driver of innovation in infrastructure, both the historical context and the future prospects of public infrastructure are analysed. Significantly, the book also examines China’s ambitious plans to create a ‘high-speed rail economy’ and its Belt and Road Initiative across Asia that offers an interesting contrast to infrastructure developments in the United States and other advanced economies.

Global Developments in Public Infrastructure Procurement is an essential source of reference for academics and students of economics, public sector finance and urban infrastructure.

Critical Acclaim
‘Today there is more public debate than ever about the state of public infrastructure and the wisdom of selecting particular options for significant investments. This timely publication by Grimsey and Lewis, building upon their earlier key contributions to this debate, is one of the very few publications to place infrastructure investment within the wider contextual financial framework in which these projects exist. The key drivers and barriers to current infrastructure investment are clearly and expertly presented and these principles are illustrated by considering the position in China and the US at opposite ends of the investment spectrum. The informed consideration of public–private partnerships, (PPPs), is welcomed. This excellent publication cuts through the emotional arguments associated with private finance for public infrastructure and demonstrates that, while not a panacea, the PPPs in certain locations, for certain projects and by certain procurement routes do have a clear role to play in infrastructure and service investment.’
– Nigel Smith, University of Leeds, UK

‘The trajectories of infrastructure investment in China and the West are going in different directions. That is the focus of both the first and last chapters of this important book exploring the options available for the procurement of public infrastructures. During that discussion, Grimsey and Lewis address important questions: does public investment lead or follow economic development? What are the contributions of China’s megaprojects to its fast-growing economic power? What can public–private partnerships do or not do when used in the procurement of public infrastructures? How do PPPs compare to other models of infrastructure procurement? In an ever-increasingly urbanized world, there are few more important discussions than how governments can pay for the infrastructures that make urban life possible. Grimsey and Lewis have made an important contribution to that discussion.’
– Richard E. Hanley, CUNY Institute for Urban Systems, New York City College of Technology, US