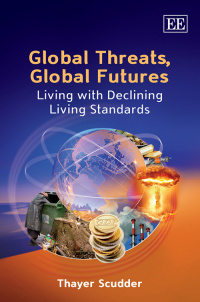 9781848448490 Edward Elgar Publishing
Thayer Scudder, Professor Emeritus of Anthropology, California Institute of Technology, US
Publication Date: June 2010 ISBN: 978 1 84844 849 0 Extent: 304 pp
Global threats can be expected to cause a global environmental crisis and declining living standards for most people. Threats analyzed include poverty, cultural, economic, political and religious fundamentalism, consumption, population increase and degradation of the global ecosystem. Chapters on the United States, China and Zambia illustrate difficulties that high, middle and low income countries face in addressing such threats. The final chapter examines the type of transformational change required just to reduce the rate and magnitude of future decline.

More Information
Critical Acclaim
Contents
More Information
Global threats can be expected to cause a global environmental crisis and declining living standards for most people. Threats analyzed include poverty, cultural, economic, political and religious fundamentalism, consumption, population increase and degradation of the global ecosystem. Chapters on the United States, China and Zambia illustrate difficulties that high, middle and low income countries face in addressing such threats. The final chapter examines the type of transformational change required just to reduce the rate and magnitude of future decline.
Critical Acclaim
‘A work of political economy from the perspective of an anthropologist who has made a career of studying poverty and displaced people, Global Threats, Global Futures will prove rewarding reading for anyone concerned with issues of economic development, environmental and cultural degradation, and the causes and solutions of poverty. Most of all, Thayer Scudder illuminates a path, not only possible but plausible, through a destructive maze of humankind’s own making – if only the political will can be found to tread it.’
– Engineering & Science

‘Thayer Scudder is one of those gifted authors who have the experience and the vision to span multiple sectors and far flung sites in assessing where humankind and its habitat are heading. His restless curiosity in everything around him has led him to become not simply the world’s leading authority on the impacts on the lives of people resettled by dam-building projects but an innovative thinker about development anthropology and the threats to the globe from poverty, fundamentalism in all its pernicious forms and environmental degradation. This iconoclastic book assails sacred cows ranging from the World Bank to the malign role of Buddhist priests in the late civil war in Sri Lanka. The work is not reassuring. But its conclusion that humans can learn to live with declining living standards is more uplifting than doom-laden.’
– David McDowell, Former Director General of the IUCN and New Zealand Ambassador to the United Nations

‘Neither Pollyanna nor Prophet of Doom, Professor Scudder has drawn on his 55 years of international experience and presented a clear, hard hitting, extraordinarily well documented analysis of the critical and urgent global challenges that face humankind and of the transformations that will be required to meet those challenges. This is a very important book. It should be read by an informed public, but most particularly by leaders and policy makers of the world’s governments, international organizations, educational and religious institutions.’
– Lee Talbot, George Mason University, US

‘This is an extraordinary, bold, and exceptionally well thought out prospectus on the next century of the human condition. Declining living standards, consequential to the pervasive pursuit of growth in terms of Gross Domestic Product, is a central theme that is thoroughly documented and engagingly articulated. The decisive role in the decline of living standards played by global threats including poverty, fundamentalism, environmental degradation, wars, and excess consumption, is compellingly presented from the perspective of the author’s unique career.’
– Burton Singer, Princeton University, US

‘This impressive study of the progressive impoverishment of the world’s resources speaks with the authority of Thayer Scudder’s fifty years of experience with international programs for technological development, especially those that involve river basin development and resulting population displacement and resettlement. Case studies from different continents provide the evidence for the likelihood that the majority in future generations will lead more meager lives than their twentieth century ancestors. He points to what has gone wrong in our approach to the world and its resources and to the measures necessary to offset the damage already caused. If only citizens have the political will to adopt them.’
– Elizabeth Colson, University of California, Berkeley, US

‘This is an important book. It has to be listened to, and for two reasons. The first is the expertise of the author: the guy has been there: this is an anthropologist who is constantly in the field. And he possesses a wide range of skills: part ethnographer, part biologist, as much a humanist as a scientist. The combination of experience and expertise is as powerful as it is unusual. Sadly, a second force in favor of this book is the temper of the times. The giddiness of the last century has been driven underground by the perils of this.’
– Robert H. Bates, Harvard University, US
Contents
Contents: Introduction 1. The Threat of Global Poverty 2. The Threat of Fundamentalism 3. The Threat of Environmental Degradation 4. United States 5. People’s Republic of China 6. Zambia 7. Transforming Global Societies References Index
Add to Wish List