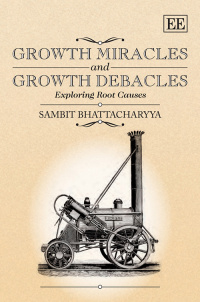 The author examines the world’s economic history over the last five centuries, replete with growth miracles and growth debacles: growth in Britain was steady, yet China lost her early advantage; North America settler colonies performed significantly better than those of Asia and Africa; Australia and Argentina were notably similar at the start of the twentieth century but delivered strikingly different growth outcomes. The book argues that these differences in growth rate are best explained by an interplay of factors, namely economic, political and geographical. In conclusion it presents long-run comparative growth narratives for Africa, China, India, the Americas, Russia and Western Europe.

Presenting a unique and original analytical framework to explain economic growth and decline, and bridging empirical growth literature and economic history, this book will prove a stimulating read for both academic and professional economists, and scholars of economic history and economic growth. Other social scientists including sociologists, political scientists and economic historians will also find the book to be of great value.
Critical Acclaim
‘Sambit Bhattacharyya’s book on economic growth reviews aspects of both theory and evidence from the modern growth literature. The review will be useful and interesting to anyone – laymen, students, or trained economists – who desire a better understanding of modern growth theory and evidence. Economic historians may be particularly interested in its application of modern growth theory to various countries at different stages of development and over time.’
– John W. Dawson, EH.Net
Contents
Contents: Preface 1. Introduction Part I: History and Economic Development 2. The Great Divergence: An Account of the Growth Miracles and Growth Debacles Since AD 1000 3. Theories of Root Causes of Economic Progress 4. Empirical Evidence 5. Root Causes of Economic Development: A Unifying Framework Part II: Promoting Growth in the Current Environment: Evidence and Policies 6. Institutions and Trade: Competitors or Complements in Economic Development 7. Improving Institutions with Trade Policy: Myth or a Possibility 8. Which Institutions Matter Most for Economic Growth? 9. Making Policy Work: A Road Map for Future Growth References Index
Add to Wish List
eBook for individuals
978 0 85793 032 3
From $40.00
Click here for options
eBook for library purchase
978 0 85793 032 3
View sample chapter and check access on: