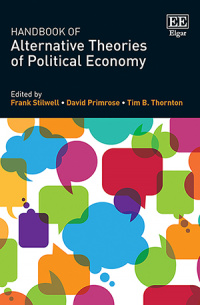 9781789909050 Edward Elgar Publishing
Edited by Frank Stilwell, David Primrose and Tim B. Thornton,
Publication Date: 2022 ISBN: 978 1 78990 905 0 Extent: 520 pp
This Handbook provides a comprehensive overview of established and cutting-edge contributions to political economic thought. Featuring chapters by both leading and emerging scholars, the book showcases the rich array of theoretical approaches to the study of political economy, and the vibrant and productive debates amongst modern researchers within the field.

Separate sections of the book deal with political economy as an area of knowledge, its principal theoretical traditions, the dynamics and socio-ecological foundations of economic systems, and political economy’s interdisciplinary connections. Thirty-two chapters cover the full spectrum of contemporary political economy, including classical, Marxist, post-Keynesian, institutional, evolutionary, and feminist approaches, recent studies of capital as power, modern money theory, behavioural economics, social structures of accumulation, and race, gender and class. The volume concludes by reflecting on how these theories of political economy can contribute to making a better world.

Pluralist and interdisciplinary in its approach, this Handbook is a key resource for students and teachers of political economy and heterodox economics, as well as for other social scientists wanting to understand political economic processes.

Critical Acclaim
‘Mainstream economics, relative to heterodoxy and social science generally, is so extreme in methodology, theory and conceptualisations, it has spawned a variegated tsunami of alternative theories. This volume expertly and comprehensively engages this pluralism across schools, approaches and topics offering specialist insights alongside informative expositions – imperative reading for the intellectually open.’
– Ben Fine, School of Oriental and African Studies (SOAS), UK

‘This excellent collection is a must-read book for anyone interested in learning more about political economy. The volume has been effectively organized with an inclusive approach that is not only pluralist but also interdisciplinary. The upshot of which is the facilitation of a broad, yet rigorous, understanding of political economy.’
– Susanne Soederberg, Queen’s University, Canada

‘Narrowly defined mainstream economics has clearly failed—after the Second Great Depression and in the midst of the Pandemic Depression, in addition to obscene and still-growing levels of inequality, the climate crisis, racial capitalism, and much else. This Handbook of Alternative Theories of Political Economy is exactly what is needed to expand the way we think about and do economics.’
– David F. Ruccio, University of Notre Dame, USA

PART I POLITICAL ECONOMY AS AN AREA OF KNOWLEDGE
1 Introduction to the Handbook of Alternative Theories of Political Economy 2
Frank Stilwell, David Primrose and Tim B. Thornton
2 Capitalism, climate change and freedom 16
Elke Pirgmaier