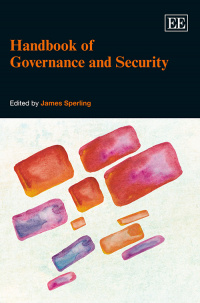 Handbook of Governance and Security

The Handbook is divided into four sections which examine, in turn: the emergence, evolution, and forms of security governance, as well as the theoretical orientations that have so far dominated the literature (networks, multilateralism, regimes, and systems); the varieties and nature of security governance in eight discrete geostrategic regions; nine dimensions of governance that have been securitized in the post-Cold War period; and lastly the role of specific institutions in their regional context.

This comprehensive Handbook will be of interest to both academics and postgraduates as well as practitioners and specialists in security, foreign policy, and governance.

Critical Acclaim
‘Ambitious, comprehensive, and impressive. James Sperling’s splendid edition is a milestone in scholarship on regional and global governance, security studies, and international relations. Covering theory, major world regions and key policy dimensions, as well as institutions and organizations, the volume sets the standard in the study of security governance. It is a remarkable achievement and a prime example of compelling editorial work.’
– Ulrich Krotz, Professor, Chair in International Relations, and Director of the Europe in the World programme at the Robert Schuman Centre for Advanced Studies, European University Institute, Italy

‘This volume is a cutting-edge collection of articles on security governance that together cover a complex set of challenges and coordination efforts at the global, regional, and local level. The book demonstrates how the concept of security has gradually been broadened to not only a multiplicity of issues, but also a multiplicity of actors involved. It will certainly become a standard reference for scholars interested in understanding modern theories and practices of governance of security.’
– Luk Van Langenhove, Director, United Nations University Institute on Comparative Regional Integration Studies (UNU-CRIS), Belgium

‘This up-to-date book provides IR scholars with a compelling and rigorous understanding of security governance. The contributions draw our attention to the conceptual, theoretical, and empirical underpinnings of this topic. Leading experts in the field thereby provide illuminating perspectives covering most of the world’s regions, institutions, and dimensions of security. This makes it a wonderfully comprehensive treatment of a crucial paradigm in the study of International Relations that has not received enough attention so far.’
– Stephanie C. Hofmann, Associate Professor of Political Science, Deputy Director, Centre on Conflict, Development and Peacebuilding, Graduate Institute of International and Development Studies, Switzerland

‘Overall, Sperling has positively gained momentum on a topic that might grow to become the most relevant lens to capture encompassing security practices worldwide. This handbook is a notable stepping stone worth the attention of all scholars and students exploring processes of security and governance.’
– Carlos Solar, Political Studies Review

PART I: INTRODUCTION
1. Introduction: Governance and Security in the 21st Century
James Sperling

35. Organisation for Security and Cooperation in Europe
David Galbreath and Aynur Seidyusif