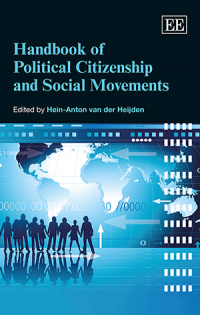 Social scientists, MA and PhD students conducting research in social movements and citizenship, at a theoretical and empirical level, will benefit from the authoritative assessment of forms of political citizenship and major developments in social movement studies.
Critical Acclaim
‘This new Handbook edited by Hein-Anton van der Heijden systematically presents the literature on social movements and citizenship. It provides a valuable resource for scholars working in both fields, and is useful for faculty and students alike. Most importantly, by bringing together key authors from both fields, this edited volume encourages research linking the two fields, and thus it could provide the basis for a new research agenda that bridges the focus on the microlevel in citizenship research with the meso- or macrolevel foci typical of the social movement literature. The book covers a breadth of research. . . familiar with one or both fields. This volume takes the contributions of citizenship research and applies them to the study of social movements, thereby moving scholarship beyond divisive distinctions between institutional and non-institutional participation.’
– Swen Hutter and Jasmine Lorenzini, Mobilization

‘Enhanced with the inclusion of a fifty-one page Index, the Handbook of Political Citizenship and Social Movements is an essential addition to academic library Political Science reference collections and supplemental studies reading lists.’
– Midwest Book Review

‘Social movement and citizenship studies have distinct trajectories of development, but Van der Heijden clearly argues that the fields share much ground in common. What's more, he sucessfully accomplishes the goal stated in the volume's introduction: to bridge or narrow the gap between the two literatures "in order to lay the foundations for a social science research program that would do more justice to social and political reality"’
– J.J. Reed, Choice

‘This outstanding Handbook establishes the relationship between political citizenship and social movements as an area of study. As an in-depth and well-conceived source for beginners, experienced scholars and students alike, it provides theoretically rich, methodologically diverse, and empirically wide-ranging chapters on political struggles over citizenship. Moreover, the bridging between sociological and political theories of movements and citizenship reveals both in a different light.’
– Engin Isin, The Open University