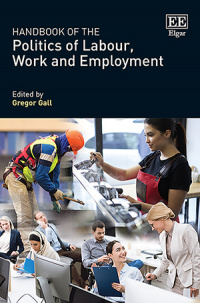 Handbook of the Politics of Labour, Work and Employment

9781784715687 Edward Elgar Publishing
Edited by Gregor Gall, Visiting Professor of Industrial Relations, University of Leeds, UK
Publication Date: 2019 ISBN: 978 1 78471 568 7 Extent: 464 pp
Providing a thorough overview of the political nature and dynamics of the world of work, labour and employment, this timely Handbook draws together an interdisciplinary range of top contributors to explore the interdependent relationship between politics and labour, work and employment. The Handbook explores the purpose, roles, rights and powers of employers and management, workers and unions, states and governments in the age of globalised neo-liberalism.

More Information
Critical Acclaim
Contributors
Contents
More Information
Providing a thorough overview of the political nature of, and dynamics between, the worlds of work, labour and employment, this timely Handbook draws together an interdisciplinary range of top contributors to explore the interdependent relationship between politics and labour, work and employment.

Chapters provide a wide range of differing theoretical approaches with which to explore the legal, economic and socio-political aspects of labour, work and employment in pre-capitalist, capitalist and post-capitalist societies. The Handbook explores the purpose, roles, rights and powers of employers and management, workers and unions, states and governments in the age of globalised neo-liberalism. Different non-standard and non-renumerated types of work are examined with their counterparts, offering a thorough insight into the modern economy with a key focus on migration, gender, race and community.

An essential reference for political economists as well as business and management scholars, this comprehensive Handbook provides an important analysis of the interconnectedness of politics and labour, work and employment. This will also be a useful read for policy makers looking for broad insights to the ways in which policies can impact labour, work and employment.

Critical Acclaim
‘Many of the contributors to this book point out how daunted they felt when they began their chapters. There is no argument that the authors had their work cut out, but they triumphantly achieve the ambitious goals they were set. This is an extremely useful book which features authoritative overviews of complex, and potentially baffling, subjects and guides readers through the latest evidence and developments in a wide range of theoretical traditions. This evidence is drawn from across the world’s largest economies and space is made for some original research. Chapters draw on a variety of disciplinary resources to illuminate complex issues at the heart of current research and scholarship.’
– Ralph Fevre, Cardiff University, UK
Contributors
Contributors: B. Abbott, G. Alberti, S. Austen, A. Bogg, S.C. Bolton, Z. Ciupijus, R. Cohen, N. Davidson, P. Findlay, C. Forde, G. Friedman, G. Gall, B.W. Halpin, B. Harley, T. Hastings, J. Heyes, C. Howell, T. Jefferson, S. Jefferys, B.E. Kaufman, K. Laaser, L. Lord, M.M. Lucio, R. MacKenzie, S. Mustchin, G. Patmore, G. Sewell, V. Smith, M. Stuart, C.C. Williams, S. Williams

1. The politics of labour, work and employment
Gregor Gall

PART I Foundations for Understanding the Politics of Labour, Work and Employment
2. A theoretical framework for labour, work, and employment research
Bruce E. Kaufman

4. Labour, work and employment in the age of globalised neo-liberalism
Jason Heyes and Thomas Hastings

5. The neo-liberal state and the regulation of class relations
Chris Howell

7. The politics and diversity of worker representation: the increasing fluidity and challenge of representation
Miguel Martínez Lucio and Stephen Mustchin

8. Employers and their representatives: discretion, power, markets, and managers in the transformation of twenty first century work
Gerald Friedman

PART II Aspects of the Politics of Labour, Work and Employment
11. Managing labour and the labour process
Bill Harley

12. Who manages the managers?
Graham Sewell

13. Beyond the workplace: how civil society organisations attempt to exercise regulatory influence over work and employment
Steve Williams and Brian Abbott

17. Skills and the social value of work
Patricia Findlay

18. The expansion of the labour market and the politics of migration
Gabriella Alberti

21. Training and development – whose interests are being served?
Mark Stuart