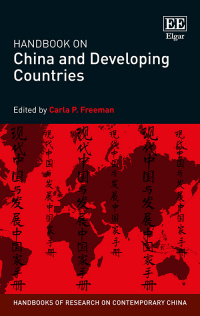 Handbook on China and Developing Countries

9781782544203 Edward Elgar Publishing
Handbooks of Research on Contemporary China series
Edited by Carla P. Freeman, Member of the China Studies Faculty and Director, The Foreign Policy Institute, Johns Hopkins University, School of Advanced International Studies, US
Publication Date: June 2015 ISBN: 978 1 78254 420 3 Extent: 608 pp
This Handbook explores the rapidly evolving and increasingly multifaceted relations between China and developing countries. Cutting-edge analyses by leading experts from around the world critically assess such timely issues as the ‘China model’, Beijing’s role in international development assistance, Chinese peacekeeping and South-South relations, and developing countries and the internationalization of the renminbi. Chapters also examine China’s engagement with individual countries and regions throughout the developing world. For scholars, practitioners, and postgraduates, the volume’s breadth and depth of coverage will inform and guide present and future analysis.

Innovative, data-rich analysis by leading experts from around the world critically assesses such timely issues as the ‘China model’, Beijing’s role in international development assistance, World Bank governance, Chinese peacekeeping and South-South relations, and developing countries and the internationalization of China’s currency. China’s engagement with individual countries and regions throughout the developing world is examined, including Chinese private sector investment in Africa.
This unique and comprehensive study is an essential reference for scholars and policy experts alike, with a breadth and depth of coverage that will inform and guide analysis for academics, practitioners and postgraduates.

Critical Acclaim
‘I see this Handbook as a reference work for those who wish to understand China’s expanding role in development projects around the world and the motivations and implications of these interventions. The set of authors who contribute to the book not only present instigating insights but also generate deep reflections that can sustain a research agenda with China as a central actor.’
– Alexandre Cesar Cunha Leite, Progress in Development Studies

‘China’s rise transforms its interactions with other developing countries in multiple ways. This volume offers a valuable introduction to this transformation from diverse perspectives.’
– Justin Yifu Lin, Peking University, China

'China will inevitably become the number one power in the world. In purchasing power parity terms, its economy is already number one. Increasingly, more and more developing countries are hitching their wagons to China’s economic locomotive. Hence, this volume addresses a key dimension of our new global order. It could not be more timely or more relevant for both academics and policymakers.'
– Kishore Mahbubani, National University of Singapore and author, The Great Convergence: Asia, the West and the Logic of One World

‘China’s emergence as an economic and trading superpower is one of the dominant stories of our time, and its ties with other developing countries are an underappreciated part of this story. In 2011 China was the main trading partner of 124 different countries, most of which are developing. This Handbook fills an essential gap in the literature on China’s rise, examining China’s relations with different regions and how these are reshaping global institutions from UN peace-keeping to IMF fire-fighting. This is an essential resource for the study of China and the global order.’
– David Dollar, China Center, Brookings Institution

6. Another Angle on a New Intimacy: How the Chinese Perceive Africa and Latin America
Simon Shen

PART III CHINA, THE DEVELOPING WORLD AND THE CHANGING INTERNATIONAL ORDER
8. The World Bank and China: The Long Decade of Realignment
Gregory Chin

14. China as an Environmental Actor in the Developing World – China’s Role in Global Deforestation in Developing Countries
Carla P. Freeman and Yiqian Xu

19. Seeing the Forest for the Trees: China’s Shifting Perceptions of India
Selina Ho

20. China and the Development of Myanmar
Yun Sun

21. China in the Pacific Islands: Impacts and Implications
Terence Wesley-Smith