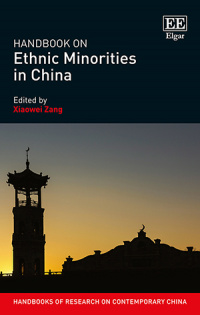 Handbook on Ethnic Minorities in China

9781784717353 Edward Elgar Publishing
Handbooks of Research on Contemporary China series
Edited by Xiaowei Zang, Chair Professor of Social Sciences, Department of Social and Behavioral Sciences, City University of Hong Kong, Hong Kong
Publication Date: 2016 ISBN: 978 1 78471 735 3 Extent: 544 pp
This much-needed volume explains who ethnic minorities are and how well do they do in China. In addition to offering general information about ethnic minority groups in China, it discusses some important issues around ethnicity, including ethnic inequality, minority rights, and multiculturalism. Drawing on insights and perspectives from scholars in different continents the contributions provide critical reflections on where the field has been and where it is going, offering readers possible directions for future research on minority ethnicity in China. The Handbook reviews research and addresses key conceptual, theoretical and methodological issues in the study of ethnicity in China.

The Handbook reviews research on major ethnic issues in China and addresses some key conceptual, theoretical and methodological issues in the study of ethnicity in China. It offers updated research findings on minority ethnicity, consolidates knowledge scattered in different disciplines in the existing literature and provides readers with a multi-disciplinary and multi-faceted coverage in one single volume. Drawing on insights and perspectives from scholars in different continents the contributions provide critical reflections on where the field has been and where it is going, offering readers possible directions for future research on minority ethnicity in China.

Critical Acclaim
‘. . . the volume provides a broad, stimulating, interdisciplinary
overview of Chinese ethnicminorities and minority policies. It is particularly helpful as an introductory work, offering insights and plenty of ideas, inspirations, and suggestions for further research in the wide field of ethnic issues in China. It is highly recommended to students and scholars interested in China’s ethnicminority policies and developments.’
– Thomas Heberer, The China Journal

‘This Handbook consists of thoughtful, mostly excellent essays on aspects of Chinese government policy towards minorities, and the representations of minorities in official and unofficial discourse. The essays concentrate well-integrated information into a small space.’
– E.N. Anderson, Choice

‘Among the recent works on ethnicity in China, few are as encompassing as the Handbook on Ethnic Minorities in China. Apart from containing a wide range of relevant topics covered by leading scholars in their sub-fields and presenting a spectrum of perspectives, the Handbook is accessible to readers well beyond the corps of specialists. Its articles will not only inform future scholarship, but will also provide students, journalists, policy-makers and others with an empirically-based and theoretically-informed introduction to key issues.’
– Barry Sautman, Hong Kong University of Science and Technology
Contributors
Contributors: Y. Chen, M. Clarke, M. Dillon, S. Du, B. Gustafsson, W. Jankowiak, H. Lai, K.Y. Law, K.-m. Lee, J. Leibold, Y. Luo, J. Ma, C. Mackerras, T. Oakes, L. Schein, B. Shurentana, B.R. Weiner, X. Zang, M. Zhou
Contents
Contents:

1. Introduction: Who are ethnic minorities and how well do they do in China?
Xiaowei Zang

4. Xinjiang and the Uyghurs
Michael Dillon

9. The state of research on urban Chinese ethnicity: Urban Mongols
William Jankowiak and B Shurentana

16. Ethnic marginalization in China: The case of the Lahu
Jianxiong Ma

Poverty and Inequality in East Asia