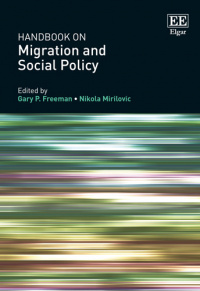 9781783476282 Edward Elgar Publishing
Edited by Gary P. Freeman, University of Texas at Austin and Nikola Mirilovic, Department of Political Science, University of Central Florida, US
Publication Date: March 2016 ISBN: 978 1 78347 628 2 Extent: 496 pp
In this detailed Handbook, an interdisciplinary team of scholars explores the consequences of migration for the social policies of rich welfare states. They test conflicting claims as to the positive and negative effects of different types of migration against the experience of countries in Europe, North America, Australasia, the Middle East and South Asia. The chapters assess arguments as to migration’s impact on the financial, social and political stability of social programs. The volume includes comprehensive reviews of existing scholarship as well as state of the art original empirical analysis.

More Information
Critical Acclaim
Contributors
Contents
More Information
In this comprehensive Handbook, an interdisciplinary team of distinguished scholars from the social sciences explores the connections between migration and social policy. They test conflicting claims as to the positive and negative effects of different types of migration against the experience of countries in Europe, North America, Australasia, the Middle East and South Asia, assessing arguments as to migration’s impact on the financial, social and political stability and sustainability of social programs. The volume reflects the authors’ curiosity about the controversy over the connection between social and cultural diversity and popular support for the welfare state.

Providing timely and original chapters which both critique the existing literature as well as build on and advance theoretical understanding, the authors focus on the formal settlement and integration polices created for migrants as well as corollary state policies affecting migrants and migration. A clutch of chapters investigates the linkage between migration and trade theory, foreign direct investment, globalization, public opinion, public education and welfare programs. Chapters then deal with leading receiving states as well as India and the authors examine the regulation of migration at the subnational, national, regional and global levels. The topic of migration and security is also covered.

This compelling and exhaustive review of existing scholarship and state-of -the-art original empirical analysis is essential reading for graduates and academics researching the field.

Critical Acclaim
‘Social policy and the political economy of the welfare state sit at the sharp edge of immigration politics and policy making. The editors of this comprehensive and up-to-date Handbook have brought together an authoritative group of younger and older specialists, transatlantic in scope, who offer clear empirical analyses of the dilemmas and paradoxes disturbing politicians and electorates everywhere today.’
– Adrian Favell, University of Leeds, UK

‘Migration is one of the most vexing policy issues of our time. In this Handbook the editors have assembled an all-star cast of scholars to look at the many dimensions of migration policy. The book breaks new ground and it will be required reading for anyone seriously interested in how and why states seek to control the movement of people across borders.’
– James F. Hollifield, Southern Methodist University, US

7. Immigration and the Political Economy of Public Education
Francesq Ortega and Ryuichi Tanaka

PART IV OPPOSITION TO IMMIGRATION, SECURITY AND THE LIMITS TO FREE MOVEMENT IN THE EUROPEAN UNION
11. When Virtues Become Vices: The ‘Achilles Heel’ of Migration Social Policy
Kelly M. Greenhill

12. An Unstable Equilibrium: Freedom of Movement and the Welfare State in the European Union
Andrew Geddes and Leila Hadj-Abdou

14. Immigrant Integration, Political Radicalization and Terrorism in Europe: Some Preliminary Insights from the Early Millennium (2000-2010)
Gallya Lahav and Arie Perliger

16. Rumours That Diversity is the Death of the Welfare State are Greatly Exaggerated: On the Resilience of the European Social Model
Markus M.L. Crepaz

19. Naturalization and the Socio-Economic Integration of Immigrants: A Life Course Perspective
Floris Peters and Maartin Vink

20. Tales of the Cities: Local-Level Approaches to Migrant Integration in Europe, The US and Canada
Patrick Ireland

24. The Case of the Missing Skilled Immigrants in the United States
Mariana Medina