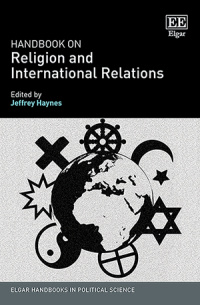 Handbook on Religion and International Relations

More Information
Critical Acclaim
Contributors
Contents
More Information
This comprehensive Handbook examines relationships between religion and international relations, mainly focusing on several world religions – Christianity, Islam, Hinduism and Judaism. Providing a timely update on this understudied topic, it evaluates how this complex relationship has evolved over the last four decades, looking at a variety of political contexts, regions and countries.

Original chapters analyse how varying religions shape people’s attitudes towards the organisation and operations of political systems worldwide. As well as investigating core issues and topics such as religion, foreign policy, terrorism and international security, the Handbook also provides clarity on topical and controversial issues such as Islamist extremism, Hindu nationalism and Christian civilisationism. Top international contributors offer further analysis via important case studies of religion and international relations across the globe.

Providing crucial information, this Handbook will be an excellent resource for higher-level students and researchers of religious studies, international relations and politics, as well as policy makers and professionals from a variety of backgrounds and orientations.

Critical Acclaim
‘This is a highly useful account of the impact of religion on international relations, and perhaps an important counterweight to both its absence in much of the literature, and, conversely, the breathless commentary that can suggest inevitable conflict between different belief structures.’
– Anthony Smith, New Zealand International Review

‘The global rise of strident new forms of politicized religion in international relations cries out for a single volume that provides a timely and authoritative overview. This book covers it all – the core issues, the key debates, and the arresting case studies – relating to every religious tradition in all sectors of the world. It is a Handbook that will be essential to policymakers and scholars and to anyone concerned about the persistent role of faith in the global politics of the 21st century.’
– Mark Juergensmeyer, University of California, Santa Barbara, US and author of Global Rebellion: Religious Challenges to the Secular State

‘As we approach the end of the first quarter of the 21st century, the influence of religion in international relations has perhaps never been more complex and contested. But it also may be that religious ideas and actors – whether in Indonesia or India, America or sub-Saharan Africa, Russia or Brazil, Turkey or Egypt, and on and on and on – have never been more consequential in shaping the identities, perceptions, and conflicts that drive the politics of the modern world. This magnificent volume is an outstanding guide – the best I know – to the complexity and consequences of religion’s role in international relations today.’
– Timothy Samuel Shah, University of Dallas, US

‘This edited volume is a significant contribution to the field of international relations and religion, it exhibits a delicate balance between the upsurge and excessive focus on 9/11 and the exceptionalism associated in most literature between Islam and terrorism. The volume focuses on an all-inclusive analysis of other forms of public and international religious actions and forms of religious authority and their respective interplay on the international level of analysis. The volume’s sections: theory, controversial topics, then case studies, makes it accessible especially to students of international relations as well as specialists on the interaction between religion and international actors.’
– Deina Abdelkader, University of Massachusetts, US

Elgar Encyclopedia of Technology and Politics