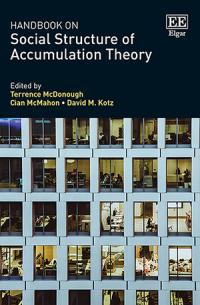 More Information
Critical Acclaim
Contributors
Contents
More Information
This pioneering Handbook offers a state-of-the-art exploration of the social structure of accumulation theory, a leading theory of stages of capitalism, expertly summarising its development to date. It breaks new ground in several areas, including econometric evidence for the theory and developing institutional analyses of technology and the environment.

Expert international contributors offer an in-depth treatment of the theory of social structures of accumulation, extending this analysis to areas of the world where the application of the theory has previously been underexplored such as Western and Eastern Europe, Latin America, and India. It offers a detailed discussion of global neoliberalism, and many of the important individual institutions constituting social structures of accumulation, including in the areas of criminal justice, urban policy, technology, and corporate management.

Thought-provoking and insightful, the new ground covered in this Handbook will be a key resource for heterodox economists who are interested in social structures of accumulation, long waves, and stages of capitalism. The comprehensive background analysis on current issues will also be of interest to sociologists,political scientists, and historians.
Critical Acclaim
‘Numerous commentators have been asking whether capitalism is entering a new phase, defined by the decline of neoliberalism and its replacement by authoritarian or social democratic institutions. The Social Structure of Accumulation literature, which has long addressed the question of institutional change under capitalism, provides a rigorous academic underpinning for such a debate. This new collection provides numerous fresh perspectives on the SSA approach from a variety of academic disciplines. It will be very useful for scholars who are new to the SSA literature and to those who want to be updated.’
– Michael Reich, University of California at Berkeley, US
Contributors
Contributors: Mimi Abramovitz, Alessandro Bonanno, Susan M. Carlson, Mark Dean, Benno Engels, David B. Feldman, Jonathan Goldstein, David M. Kotz, Fred H. Lawson, Terrence McDonough, Cian McMahon, Alessandra Mezzadri, Raymond J. Michalowski, Shawn Nichols, Harland Prechel, Besnik Pula, Pedro Rey-Araujo, Samuel Rosenberg, Daniel E. Saros, William K. Tabb