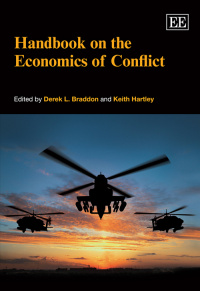 Handbook on the Economics of Conflict

9780857930934 Edward Elgar Publishing
Edited by Derek L. Braddon, formerly Professor of Economics, University of the West of England, Bristol and Keith Hartley, Emeritus Professor, Economics Department, University of York, UK
Publication Date: June 2013 ISBN: 978 0 85793 093 4 Extent: 528 pp
The Handbook on the Economics of Conflict conveys how economics can contribute to the understanding of conflict in its various dimensions embracing world wars, regional conflicts, terrorism and the role of peacekeeping in conflict prevention.

More Information
Critical Acclaim
Contributors
Contents
More Information
The Handbook on the Economics of Conflict conveys how economics can contribute to the understanding of conflict in its various dimensions embracing world wars, regional conflicts, terrorism and the role of peacekeeping in conflict prevention.

The economics of conflict is a relatively new branch of the discipline of economics. Conflict provides opportunities for applying game theory involving strategic behaviour, interactions and interdependence between adversaries. The Handbook demonstrates that conflict and its prevention is costly. It considers new dimensions such as ethnic cleansing, destructive power, terrorism, corruption, the impact of new technology, peacekeeping, the role of economists in defence ministries and the use of private contractors in conflict.

2. The History of Economic Thought on Conflict
Fanny Coulomb

6. The Government Budget Allocation Process and National Security: An Application to the Israeli–Syrian Arms Race
Itay Ringel and Asher Tishler

10. The Economics of Peacekeeping
Vincenzo Bove and Ron Smith

12. The Long-term Costs of Conflict: The Case of the Iraq War
Linda J. Bilmes and Joseph E. Stiglitz

16. Terrorism: The Case of ETA
Carlos P. Barros and Luis A. Gil-Alana

18. The Economic Impact of the Conflict in the Balkans: The Case of Serbia
Derek L. Braddon, Jonathan Bradley and Paul Dowdall

19. The Strategic Bombing of Germany in the Second World War: An Economic Perspective
Keith Hartley

20. The Reprivatization of War
Stefan Markowski and Peter Hall