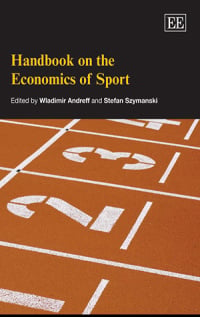 Handbook on the Economics of Sport

9781843766087 Edward Elgar Publishing
Edited by Wladimir Andreff, Professor Emeritus, University of Paris 1 Panthéon Sorbonne, France and Stefan Szymanski, University of Michigan, US
Publication Date: 2007 ISBN: 978 1 84376 608 7 Extent: 848 pp
This comprehensive Handbook provides a survey of all the major research areas in sports economics written by almost all of the active researchers in this field. It offers not only an accessible insight into the major findings of the literature but also presents some of the world’s principal researchers’ views on the unanswered questions that face us today.

More Information
Critical Acclaim
Contributors
Contents
More Information
This comprehensive Handbook provides a survey of all the major research areas in sports economics written by almost all of the active researchers in this field. It offers not only an accessible insight into the major findings of the literature but also presents some of the world’s principal researchers’ views on the unanswered questions that face us today. Issues covered include:

• sport in the economy
• the demand for sport
• cost–benefit analysis of sport
• sporting governance and the state
• individualistic sports
• team sports
• dysfunctions in sport including discrimination, doping and corruption.

It is an indispensable guide to one of the most lively and rapidly evolving fields of economics.
Critical Acclaim
‘The editors should be commended for taking on such a big task, and succeeding so well. This book should be in the library of every institution where students have to write a paper that may be related to sport, or on the shelf of any lecturer teaching economics or public finance who has even a remote interest in sport. The material is very accessible, and useful in many different settings.’
– Ruud H. Koning, Jahrbücher f. Nationalökonomie u. Statistik

‘Edward Elgar’s brilliant market niche is identifying a topic in economics, finding editors who know the area backwards and challenging them to assemble the best cross-section of relevant articles either already published or newly commissioned. Handbook on the Economics of Sport is Edward Elgar at its very best. If you love economics you’ll find many fascinating insights here; if you love sport but know little economics then this book is mostly accessible and will teach you a lot; and if you are a sports-mad economist then you will be in hog heaven. Furthermore, if, like this reviewer, you are broadly very sceptical about the reports consultants produce for governments on the supposed economic windfall from hosting a big event or subsidising a stadium then you will get a lot of good counter-arguments in this volume. Indeed there are several chapters on the above theme that I’m sure I’ll be copying frequently to government officials in years to come. . . The demand for sport is a fascinating subject and it is hard to pick out just one chapter from the second section. Read them all – they make a wonderful 65-page treat. . . Part VI was a real feast, a smorgasbord. . . This is a magnificent piece of work and the 36-page index rounds it all off splendidly.’
– John Blundell, Economic Affairs

‘The book covers the most important areas of research of an emerging economic sub-discipline spanning the past half a century. It serves admirably the purpose of an introduction into the rich and growing area of reflection for all concerned. . . the editors and authors of the Handbook have done a commendable job of accumulating sophisticated material for many economists, managers, politicians and self-conscious fans, who are sure to find excellent training ground for the whole heptathlon. . . This book will be invaluable for advanced students investigating professional sport. From the point of view of lawyers, particularly those engaged with the relationship between law and sports governance, the Handbook offers invaluable analysis of the economic issues that are alluded to in those debates but rarely examined in detail. . . These insights will also prove useful for policy analysts and sports administrators for whom many sections should be considered mandatory reading.’
– Aleksander Sulejewicz, Journal of Contemporary European Research

‘Over 800 pages on the economics of sport. What a feast! What a treat! The editors have done a wonderful job both in terms of breadth – from David Beckham to child labour in Pakistan – and depth, tournaments and luxury taxes for example. . . The 86 chapters are uniformly of a very high standard and illuminating. And there are real gems in some of the contributions.’
– British Journal on the Economics of Sport

‘This very interesting and comprehensive book achieves its objective, namely to present an overview of research in sports economics at an introductory level. . . [The editors] have produced an excellent reference book that belongs in all academic institutions’ libraries. It provides extensive introduction to the growing body of literature in the rising field of economics of sport. The book’s relevant monographs should be read by institutions, cities and countries prior to their committing major resources towards sports facilities or a sporting event.’
– James Angresano, Journal of Sports Economics

‘One could think of this book as the sports-and-economics counterpart to Joy of Cooking, because it will satisfy the needs of those with a keen interest in such subjects as the demand for sport by spectators and the media. . . this encyclopedic volume is as close as anyone is likely to come in the foreseeable future to a solid, well-written reference work on the subject. Offering plenty of bibliographic references, it is an authoritative starting point for any serious discussion of a wide variety of topics at the intersection of economics and the sporting world. Highly recommended. All readers; all levels.’
– A.R. Sanderson, Choice

‘The knowledge base represented by this volume is impressive. The collection of papers also admirably demonstrates the power of economic analysis to provide insights to the workings of the world in which we live.’
– Economic Outlook and Business Review

PART I: SPORT IN THE ECONOMY
1. Sports Accounting
Wladimir Andreff

11. The Demand for Media Coverage
Frédéric Bolotny and Jean-François Bourg

16. The Economic Impact of Mega-sporting Events
Robert A. Baade

22. The Economics of the IOC
Jean-Loup Chappelet

35. Implications from the Theory of Contests for Modelling and Designing Sports Competitions
Gerd Muehlheusser

36. Citius, Altius, Fortius: The Production of World Records in the Running and Technical Disciplines in Track and Field
Bernd Frick, Joachim Prinz and Frank Tolsdorf

37. On the Competitive Structure in Professional Boxing, Or Why the Best Boxers Very Seldom Fight Each Other
Rafael Tenorio

41. The Economics of US Intercollegiate Sports and the NCAA
Robert Sandy

42. The Economics of Cycling
Michel Desbordes

44. The Economics of Tennis
Eric Barget

A. The Economics of Professional Sports and Leagues

48. The Economics of Soccer
John Goddard

50. The State of the Italian Football Industry
Umberto Lago

51. The Economics of Soccer in Spain
Jaume García and Plácido Rodríguez

55. Labour Economics on the Hardwood: the NBA
David J. Berri

58. The Economic Development of the Australian Football League
Ross Booth

61. The Economics of Cricket
Ian Preston

62. Uncertainty of Outcome, Competitive Balance and the Theory of Team Sports
Stefan Szymanski

63. The Objective Function of a Team
Stefan Késenne

72. ‘At the Top Table’: Player Unions in Soccer
Braham Dabscheck

77. Inelastic Sports Pricing at the Gate? A Survey
Rodney Fort

80. The Sporting Exception and the Legality of Restraints in the US
Stefan Szymanski

81. The Specificity of Sport and the European Community Law: The Example of Nationality
Jean-Christophe Breillat and Frank Lagarde

A Modern Guide to Sports Economics