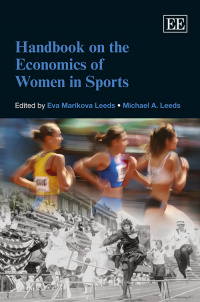 Handbook on the Economics of Women in Sports

9781849809382 Edward Elgar Publishing
Edited by Eva Marikova Leeds, Professor of Economics, Moravian College and Michael A. Leeds, Professor of Economics and Director, Graduate Studies in Economics, Temple University, US
Publication Date: 2013 ISBN: 978 1 84980 938 2 Extent: 456 pp
Women’s sports have received much less attention from economists than from other social scientists. This Handbook fills that gap with a comprehensive economic analysis of women’s sports. It also analyzes how the behavior and treatment of female athletes reflect broad economic forces.

More Information
Critical Acclaim
Contributors
Contents
More Information
Women’s sports have received much less attention from economists than from other social scientists. This Handbook fills that gap with a comprehensive economic analysis of women’s sports. It also analyzes how the behavior and treatment of female athletes reflect broad economic forces.

Contributors to this volume use current theoretical models and econometric tools to examine the legal, social, and economic forces that affect the experiences of female athletes. They address such traditional topics as discrimination against female athletes and coaches and the effect of athletic events on the economies of host countries. They also apply theory and estimation to new settings, such as how women respond to tournaments in skiing and figure skating or how the growing dominance of Korean women on the LPGA tour is a form of immigration.

This groundbreaking book is a valuable resource for professors, students, and researchers in sports economics, sports management, and women’s studies.
Critical Acclaim
‘Leeds and Leeds have filled a gaping hole in sports economics with this revealing collection of essays. The economics of women in sports has been too long neglected. By covering everything from women as sports spectators, to women as participants in individual and team sports at the collegiate and professional levels, to women’s sports internationally, Title IX, and women’s differential response to incentives, this volume not only demonstrates that there is much fertile ground to be studied, but also that the subject matter is both interesting and important.’
– Andrew Zimbalist, Smith College, US

‘In the Handbook on the Economics of Women in Sports, Leeds and Leeds put together an impressive list of heavy hitters in the sociology and economics literature on sports to produce a tour de force volume. The entire spectrum of international perspectives is covered, from US, Korean, and Australian sports to world competition at the highest level of the Olympics and international championships. Whether your interest is attendance at women's events, performance and rewards in women's pro sports, gender issues in US college sports, or international performance and how women compete, this handbook is a must read for any serious fan, and for all serious scholars interested in the impacts of being female on sports performance and competitiveness.’
– Rodney Fort, University of Michigan, US

‘The editors have succeeded in their aim of demonstrating interest in the application of economic analysis to explain the growing involvement of women in sport. There is a wealth of material contained in the bibliographies of the respective chapters, and the various authors have indicated how such insights can be applied in a number of different scenarios.’
– The Economic Record

2. Participation in Women’s Sport in Australia
Ross Booth and Michael A. Leeds

5. Gender Differences in Responses to Incentives in Sports: Some New Results from Golf
Keith F. Gilsdorf and Vasant A. Sukhatme

7. Understanding the WNBA On and Off the Court
David J. Berri and Anthony C. Krautmann

8. The Goals and Impacts of Age Restrictions in Sports
Ryan M. Rodenberg

11. The Impact of Increased Academic Standards of Proposition 16 on the Graduation Rates of Women and Men in Division IA Intercollegiate Athletics
B. Erin Fairweather

15. Do Men and Women Respond Differently to Economic Contests? The Case of Men’s and Ladies’ Figure Skating
Eva Marikova Leeds and Michael A. Leeds

17. The Economic Impact of the Women’s World Cup
Dennis Coates

19. Media Coverage and Pay in Women’s Basketball and Netball in Australia
Ross Booth

A Modern Guide to Sports Economics