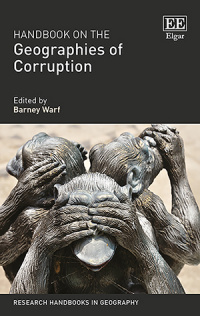 Handbook on the Geographies of Corruption

9781786434746 Edward Elgar Publishing
Research Handbooks in Geography series
Edited by Barney Warf, Department of Geography, University of Kansas, US
Publication Date: 2018 ISBN: 978 1 78643 474 6 Extent: 392 pp
The Handbook on the Geographies of Corruption offers a comprehensive overview of how corruption varies across the globe. It explores the immense range of corruption among countries, and how this reflects levels of wealth, the centralization of power, colonial legacies, and different national cultures. Barney Warf presents an original and interdisciplinary collection of chapters from established researchers and leading academics that examine corruption from a spatial perspective.

More Information
Critical Acclaim
Contributors
Contents
More Information
The Handbook on the Geographies of Corruption is a comprehensive overview of corruption, exploring the immense variation of corruption among nations, and how this reflects levels of wealth, the centralization of power, colonial legacies, and different national cultures.

In this Handbook, Barney Warf brings together a multidisciplinary and interdisciplinary collection of original new chapters from established researchers and leading academics to examine corruption from a spatial perspective. The Handbook opens with a series of thematic chapters on the causes and consequences of corruption, its geography, the connection between corruption and gender, and the role of e-government in mitigating current corruption issues. Further chapters offer a series of national case studies on countries including Mexico, Brazil, South Africa, Turkey, Russia, Pakistan, China, Indonesia, Ukraine, Bangladesh, and the Philippines from which to draw lessons.

This Handbook will be a valuable read for human geography scholars and corruption researchers, wishing to gain a more in-depth understanding of how and why corruption levels differ across the world. Practitioners concerned with combatting corruption would also greatly benefit from reading this given its real-world insights.

Critical Acclaim
‘Overall this Handbook is, in a word, excellent. Warf et al. have made a significant contribution to the literature and succeeded in crafting an indispensable resource for scholars of corruption in almost every country.’
– Sven Daniel Wolfe, Eurasian Geography and Economics

‘Corruption occurs at multiple scales and in different forms. The 21 chapters by international scholars examine corruption and e-government, development, and gender, with accounts of 16 countries/regions including China, Russia, Brazil, Mexico, South Africa, Indonesia, Pakistan, the Arab World, and Central Asia. A timely and insightful book for seminars, workshops, and policymakers.’
– Stanley D. Brunn, University of Kentucky, US

1. Introduction to the Handbook on the Geographies of Corruption
Barney Warf

6. The Consequences of Corruption
Dominik H. Enste and Christina Heldman

9. Persistent Malfeasance Despite Institutional Innovations and Public Outcry: A Survey of Corruption in Brazil
Kelly Senters and Matthew S. Winters

14. Wasta in the Arab World: An Overview
Marcus Marktanner and Maureen Wilson

18. Corruption in Bangladesh: Insights from the Financial Sector
Mohammad Nurunnabi

20. An Ambivalent State: The Crossover of Corruption and Violence in the Philippines
Cleo Calimbahin

21. Indonesia: Why Democratization Has Not Reduced Corruption
Marcus Mietzner