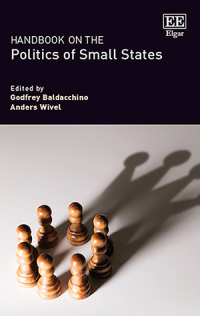 9781788112925 Edward Elgar Publishing
Edited by Godfrey Baldacchino, University of Malta, Malta and Anders Wivel, University of Copenhagen, Denmark
Publication Date: 2020 ISBN: 978 1 78811 292 5 Extent: 448 pp
Comprehensive and timely, this Handbook identifies the key characteristics, challenges and opportunities involved in the politics of small states across the globe today. Acknowledging the historical legacies behind these states, the chapters unpack the costs and benefits of different political models for small states.

More Information
Critical Acclaim
Contributors
Contents
More Information
Comprehensive and timely, this Handbook identifies the key characteristics, challenges and opportunities involved in the politics of small states across the globe today. Acknowledging the historical legacies behind these states, the chapters unpack the costs and benefits of different political models for small states.

Contributions from key scholars challenge the idealization of the small state, disputing views that these states are inconsequential at best and a nuisance to world politics at worst. Offering evidence-based discussions on their importance to the global political order, the Handbook explores how small states ‘do’ politics, the major opportunities and challenges of policy-making and implementation, and how they can respond intelligently to these opportunities. Critical contemporary dilemmas are analysed, with a particular focus on the rise of nationalism, the collapse of empires, and the importance of this in relation to small state politics.

Political science, diplomacy and international relations scholars, particularly those looking at small states, will find this a rich reference work. Case studies from all major world regions used in this Handbook will also make it a beneficial read for practitioners and policy-makers of small states.

Critical Acclaim
‘The Handbook on the Politics of Small States brings together scholars at different stages of their careers as well as policymakers to investigate the challenges of policy-making and policy implementation in small states. Especially recommended for those unfamiliar with the topic, the book may also be helpful for practitioners who are interested in an introduction to the politics of small states.’
– Christos Kourtelis, The International Spectator

‘This Handbook is timely, thoughtful, and engages critically with the politics of small states, including the challenges and opportunities faced by these states. . . I strongly recommend the Handbook to students, lecturers and researchers throughout the social sciences as well as those involved in small states’ politics and policy-making.’
– Sarina Theys, Small States & Territories

‘Baldacchino and Wivel’s Handbook is a timely addition to small state studies that aggregates a number of original contributions by noted small state experts. My overall evaluation of the book is very good, and I am certain that due to its temporal focus on recent developments and important and interesting subject areas this book will find wide use among students, researchers, politicians, and diplomats.’
– Mari-Liis Sulg, Global Affairs

‘As the number of independent countries has dramatically increased in recent decades, small states have become a big subject, and deserve a big book like this timely volume, where experts of international relations provide insightful analyses of the challenges and opportunities that small states face in an economically globalized but politically fragmented world.’
– Enrico Spolaore, Tufts University, US

‘The vast majority of all states today are small states. Scattered around the world and highly diverse, small states nevertheless share many challenges and opportunities. This Handbook shows how ‘size matters’ in the making and implementation of policies and what we can learn from comparing the politics of small states.’
– Sieglinde Gstöhl, College of Europe, Belgium

‘The authors and contributors are some of the foremost names in the academic world and they bring with them not only the academic insight but extend their discussion to the practical realities of small states and the vulnerabilities these states face as a result of environmental and other kinds of challenges including the economic, political and social. This is without doubt compulsory reading for students in the disciplines of international relations, political science, as well as policy makers and administrators.’
– Ann Marie Bissessar, University of the West Indies

‘As our work on small states continues, the origins, fatalities and survivalism, as well as the patterns and policies, make this sub-field resilient and exciting. Once again we turn to Peter Katzenstein, Herman Schwartz, Paulette Kurzer, Jonas Pontusson and Bo Rothstein who shape the unexpected outcomes in a once mercantilist or Realist hegemonic framework. The authors in this Handbook continue this tradition, expanding the scope of cases, and reaching back to the pre-Westphalian era. May we never forget the power of the weak.’
– Christine Ingebritsen, University of Washington, US