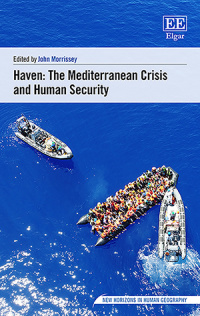 9781788115476 Edward Elgar Publishing
New Horizons in Human Geography series
Edited by John Morrissey, Professor of Geography and Associate Director, Moore Institute for Humanities, National University of Ireland, Galway
Publication Date: 2020 ISBN: 978 1 78811 547 6 Extent: 360 pp
The Mediterranean refugee crisis presents states across Europe with a common security challenge: how to intervene responsibly in mitigation and support. This book seeks to advance the UN concept of ‘human security’ in showing how a human security approach to the crisis can effectively conceptualize and respond to the intricacies of the challenges faced. It argues for a politics of solidarity in proffering integrated solutions that call out the failure of top-down, statist security measures. Leading international authors from a range of disciplines document key dimensions of the crisis, including: the legal mechanisms enabling or blocking asylum; the biopolitical systems for managing displaced peoples; and the multiple, overlapping historical precedents of today’s challenges.

More Information
Critical Acclaim
Contributors
Contents
More Information
Drawing critically on the UN concept of ‘human security’, this book offers a transformative understanding of security in responding to the Mediterranean refugee crisis. From a range of arts, humanities and social science disciplines, and through case studies incorporating key governmental, NGO and refugee perspectives, the book critiques the major geopolitical, economic and social issues of the crisis. It documents the prioritization of population management techniques that are underpinned by conventional territorial logics of security, before reflecting on the alternative priorities of human security that can facilitate an active human rights framework and a more holistic and humanitarian interventionism.

In advancing a human security approach to the crisis, the book insists upon our interconnected global sense of precarity, interrogates the human consequences of the endless cycles of conflict and displacement, and challenges the impoverished thinking of statist security agendas that divide the world into zones of sanctuary and abandonment.

Of broad appeal and relevance across the social sciences, from geography and migration studies to international relations and critical security studies, this book will also be a timely read for people working for NGOs and policy makers looking for a more holistic response to the ongoing refugee crisis.

Critical Acclaim
‘Can the framework of human security be reconstituted to provide an ethical grounding for international politics? The chapters in this volume grapple with this question as they incisively critique the Global North’s response to the so-called “refugee crisis”, and consider what kinds of conceptional and institutional changes are necessary to prioritize solidarity over securitization.’
– Emily Gilbert, University of Toronto, Canada

‘Can human security be salvaged from the violence, exclusions, and cruelties created by the geopolitics of humanitarianism? Haven suggests that it can, offering important insights into opportunities for developing geosocial solidarity with refugees with safer forms of space-making and human rights work. But it does so without succumbing to siren songs about safety and pity that perform protection and care in damaging and uncaring ways. It thereby reminds us that while the “Mediterranean Crisis” is most definitely a crisis of human insecurity, it remains a crisis created by exclusionary approaches to security as much as by war, disease and human vulnerability. A call to ongoing critical thinking about what might make “safe space” safe for all, it brings together well-informed interdisciplinary arguments about the human geographies of human rights that human security urgently needs.’
– Matt Sparke, University of California, Santa Cruz, US

‘With adroit editorial leadership, John Morrissey and the contributors take us on an intellectual journey. They convey vividly what is at stake for those enduring inhumane security. As they sweep through and with the crisis affecting the Mediterranean, it feels all the more poignant as the migration crisis is co-joined with the Covid-19 pandemic. Both have been described as “invisible” and yet the consequences for human security are far from invisible.’
– Klaus Dodds, Royal Holloway, University of London, UK
Contributors
Contributors: T. Bicchieri, A. Bilgic, J. Bloomer, M. Brehony, R. Browne, M. Brunicardi, V. Cirefice, C. Dorrity, L. Elliott, D. Estrada-Tanck, D. Gasper, T.J. Hughes, J. Hyndman, G. Kearns, V. Ledwith, J. Morrissey, A. Mountz, K. Reilly, C. Wilcock

3. Between Security and Reparations: Ireland and the European Refugee Crisis
Gerry Kearns

7. The Only Honest Thief: Critiquing the Role of Human Smugglers
Julian Bloomer

8. Operation PONTUS: An Eye Witness Account from On Board L.É. NIAMH
Michael Brunicardi

11. Hierarchies of Race, Gender and Mobility in the Journey to Irish Citizenship
Margaret Brehony

14. A Human Security Perspective on Migration to Europe
Ali Bilgic and Cathy Wilcock