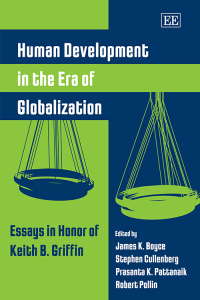 Human Development in the Era of Globalization

Essays in Honor of Keith B. Griffin

9781848446656 Edward Elgar Publishing
Edited by James K. Boyce, Professor of Economics and Program Director for Development, Peacebuilding, and the Environment, Political Economy Research Institute, University of Massachusetts, Amherst, US, the late Stephen Cullenberg, formerly Professor of Economics, Prasanta K. Pattanaik, Professor of Economics, University of California, Riverside, US and Robert Pollin, Professor and founding Co-Director, Political Economy Research Institute, University of Massachusetts-Amherst, US
Publication Date: 2009 ISBN: 978 1 84844 665 6 Extent: 416 pp
Honoring Keith Griffin’s more than 40 years of fundamental contributions to the discipline of economics, the papers in this volume reflect his deep commitment to advancing the well-being of the world’s poor majority and his unflinching willingness to question conventional wisdom as to how this should be done.

More Information
Critical Acclaim
Contributors
Contents
More Information
Honoring Keith Griffin’s more than 40 years of fundamental contributions to the discipline of economics, the papers in this volume reflect his deep commitment to advancing the well-being of the world’s poor majority and his unflinching willingness to question conventional wisdom as to how this should be done.

Four overarching themes recur in Keith Griffin’s work and this book: the need to both eradicate poverty and redress inequalities in the distribution of wealth within and among nations; the impact of growth on inequality, and conversely inequality’s impact on growth; the political economy of policy-making; and the need for openness to heterogeneity in both analytic tools and in policy recommendations. The volume begins with an introduction by the editors followed by a paper by Keith Griffin. In succeeding chapters the contributors explore strategies for reducing poverty and inequality, and provide perspectives on issues such as human development, the rural/urban divide in China, and biodiversity and sustainability.

Students, researchers, policymakers and NGO analysts exploring issues in development economics, development studies, alternative economic systems, globalization, environmental sustainability, inequality and well-being will find this book of great interest.
Critical Acclaim
‘. . . it is this reviewer’s opinion that the papers in this volume are of a very high scientific standard. Those professionals and graduate students who want to enter the area of economic development in a serious way will find this volume extremely useful.’
– Theodore P. Lianos, South-Eastern Europe Journal of Economics

A Witness of Two Revolutions
Keith B. Griffin

PART I: PERSPECTIVES ON CHINESE DEVELOPMENT
1. The Fall in Chinese Poverty: Issues of Measurement, Incidence and Cause
Carl Riskin

2. The Rural–Urban Divide and the Evaluation of Political Economy in China
John Knight, Li Shi and Lina Song

5. The Impact of Policy Reforms on Rural Poverty in Brazil: Evidence from Three States in the 1990s
Steven M. Helfand and Edward S. Levine

12. Class Transition in the Age of Globalization: Examples from the Rural Sectors in India and Kenya
Anjan Chakrabarti, Stephen Cullenberg and Mwangi wa Gîthînji

13. What Will Become of the Welfare State?
Victor D. Lippit

PART V: STRATEGIES FOR REDUCING POVERTY AND INEQUALITY
14. The Structure and Distribution of Personal Income and Poverty Reduction: A Case Study of Bangladesh During the 1990s
Azizur Rahman Khan and Binayak Sen

16. Economic Policies and Poverty Reduction in Asia and the Pacific: Alternatives to Neoliberalism
Terry McKinley